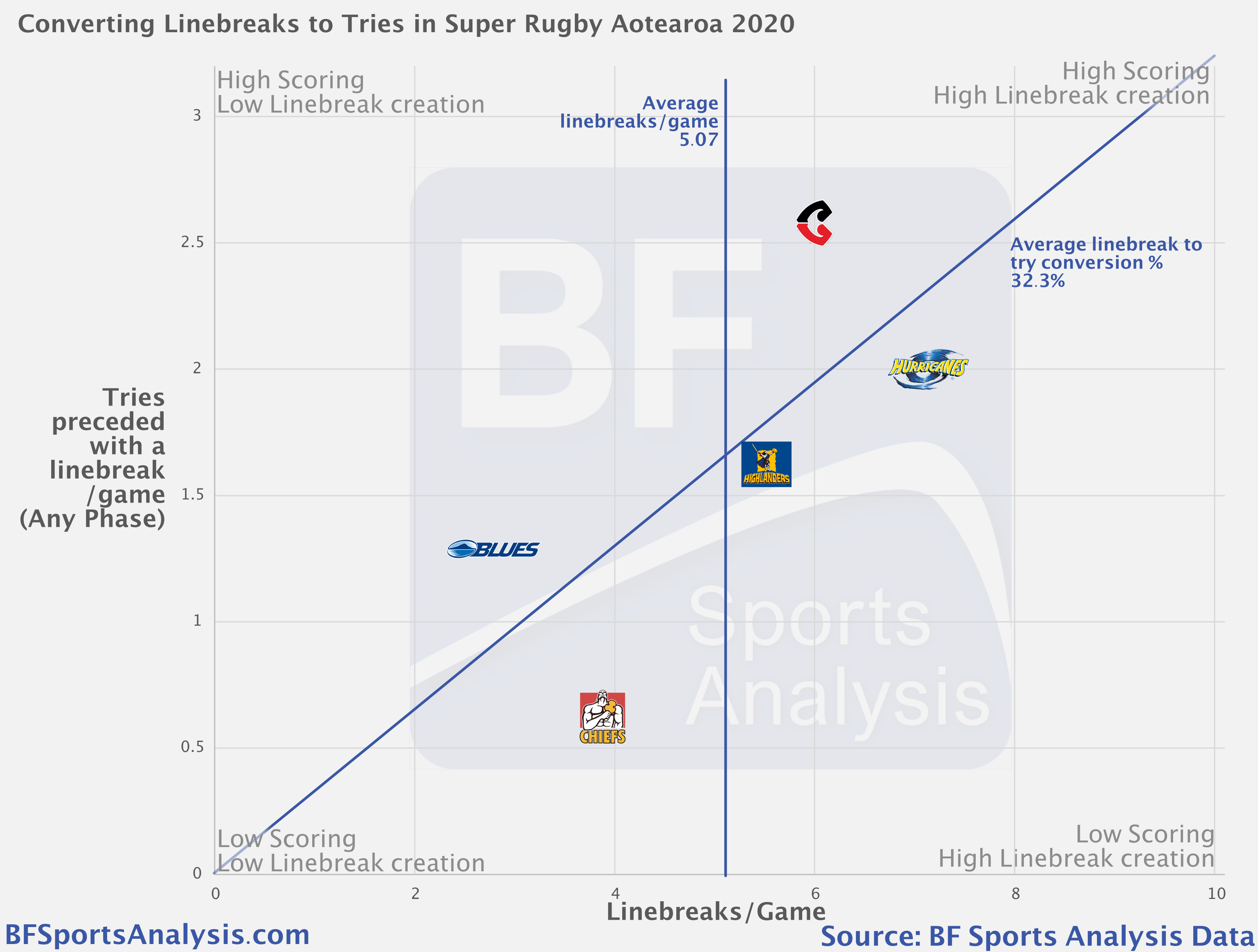 On Monday 22nd February, we’ll be co-hosting a webinar with Ben Wylie of The Chase Rugby previewing the upcoming Super Rugby Aotearoa season. If you’re interested in attending this event, you can sign up to receive more details here.

We’ll be collaborating to dive into the detail of some of the tactical and technical trends that are likely to be prominent in the 2021 edition of the competition, taking a look at each of the 5 teams in the process.

Looking at the champions of Super Rugby Aotearoa (SRA), The Crusaders, we’re going to delve into what is the difference between them and rest of the teams in SRA.

Analysis of the Crusaders

Using BF Sports Analysis xP, we can conclude that there are plenty of areas that the Crusaders were superior in Super Rugby Aotearoa 2020, lineout defence, scrummaging but what is interesting is how across the spectrum of ‘transition’ is where they make up a large portion of their value added.

The Crusaders are the only team to have scored from restarts and in fact they scored 2, both home and away against the Highlanders.

Not surprisingly they have scored the most tries originating in their own half in Super Rugby Aotearoa 2020 with 8.

So what is it about the Crusaders that makes them so capable from deep?

So the Crusaders have scored the most tries from linebreaks as well as creating the 2nd most. Why? Well there is few reasons. We’ll talk about 1 of them now and the rest in our webinar with The Chase Rugby.

This highlights that the likes of Richie Mo’unga are spotting space and mismatches and executing their passing or kicking skills to move the ball to the Crusaders dangerous back 3 of Sevu Reece, George Bridge and Will Jordan.

We’ll look at the other side of the ball for a single example of the Crusaders at their best in transition attack, a Crusaders Kick Return away to the Chiefs.

The Chiefs, in one of their best performances of the season are 4 points behind the Crusaders, 44th minute with a ruck on 12m from their line in the middle of the pitch with after setting it up with a lineout win inside their 22m. Aaron Cruden gets a great strike away from 1m off his own line and pumps it 7m from the touchline in the Crusaders half.

Crusaders have stuck 3 in the backfield, backing the 12 players in the frontline to contain any run exit options from the Chiefs. A lot of teams would persist with 2 in the backfield this situation as the blues have in the image below. The Chiefs have winger Shaun Stevenson in the sin bin too which might have also allowed Bridge to drop on the openside here more comfortably from the lineout. 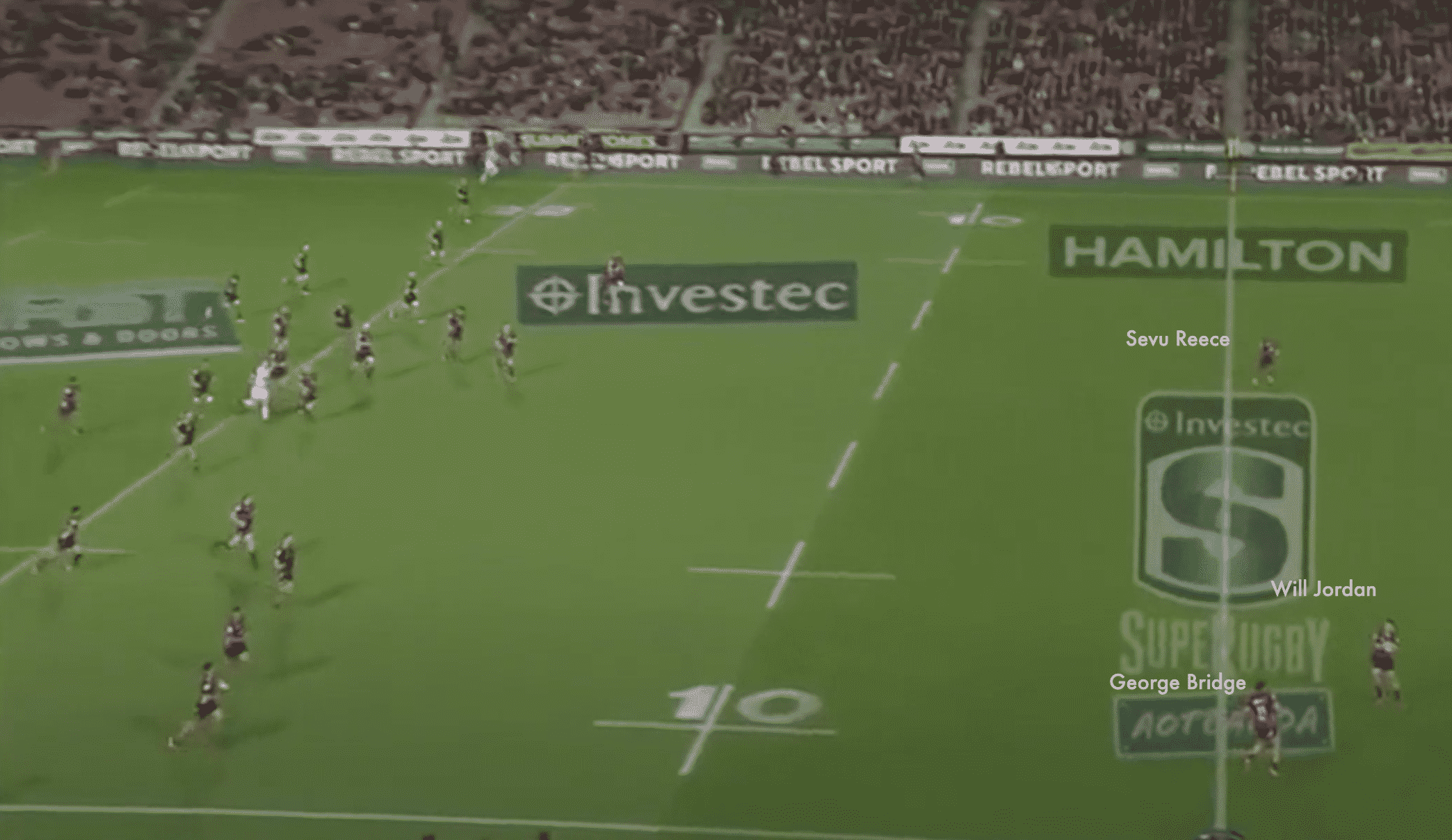 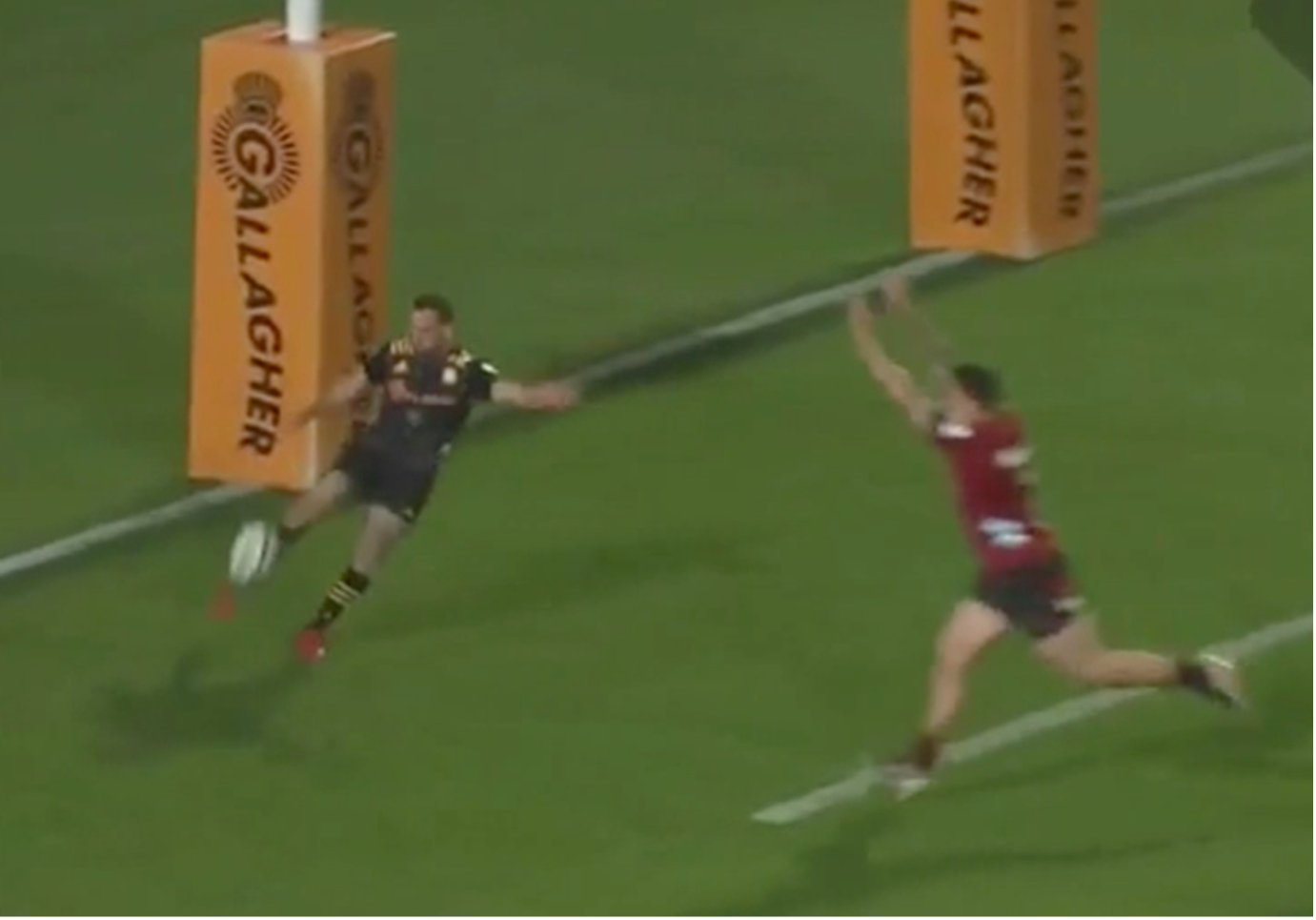 First note is the pressure on Cruden from Codie Taylor the Crusader Hooker. As well as the great work from Codie Taylor fighting through a pair of Chiefs blockers, This has allowed Will Jordan and Sevu Reece to gamble on the kick that second earlier that it is going towards the Crusaders left touchline and not down the middle.

This has allowed Will Jordan in a 3 man backfield to come right across to George Bridges wing.

The real damage is done in for the Crusaders while the ball is in the air. The whole of the Crusaders backline gets within 15m of the ball before Will Jordan has reached the kick chase line. Fetuli Paea in particular has a huge impact by worrying Lienert-Brown. What was a 2 vs 2 with the two Chiefs centres is now a 3 vs 2.

You might be questioning why the Chiefs only have 2 chasers. They played open from a 10m from own line lineout and down a man, had Cruden, McKenzie, ALB and Nankivell on the open side where Cruden kicks. Both Cruden and McKenzie sit back in the backfield covering the return kick but with 6 of the chiefs forwards tied up either in the ruck or on the lineout side, they haven’t filled the kicking side of the field well – they did cover Sevu Reece’s wing well. Again, right winger Shaun Stevenson is in the bin so the Chiefs are down a chaser on this kicking side and didn’t adjust their exit.

Richie Mo’unga, a bit slower getting back coming from more of an angle still manages to have an impact on the play by running an escort line for Chiefs hooker Bradley Slater (pun not intended). This extra split second impacts Bridge getting his offload away to Paea after he gets past ALB.

Notice too in this picture how Will Jordan has been knocked back while passing by Nankivell, for most players this would mean at most you’re going to be ruck support. 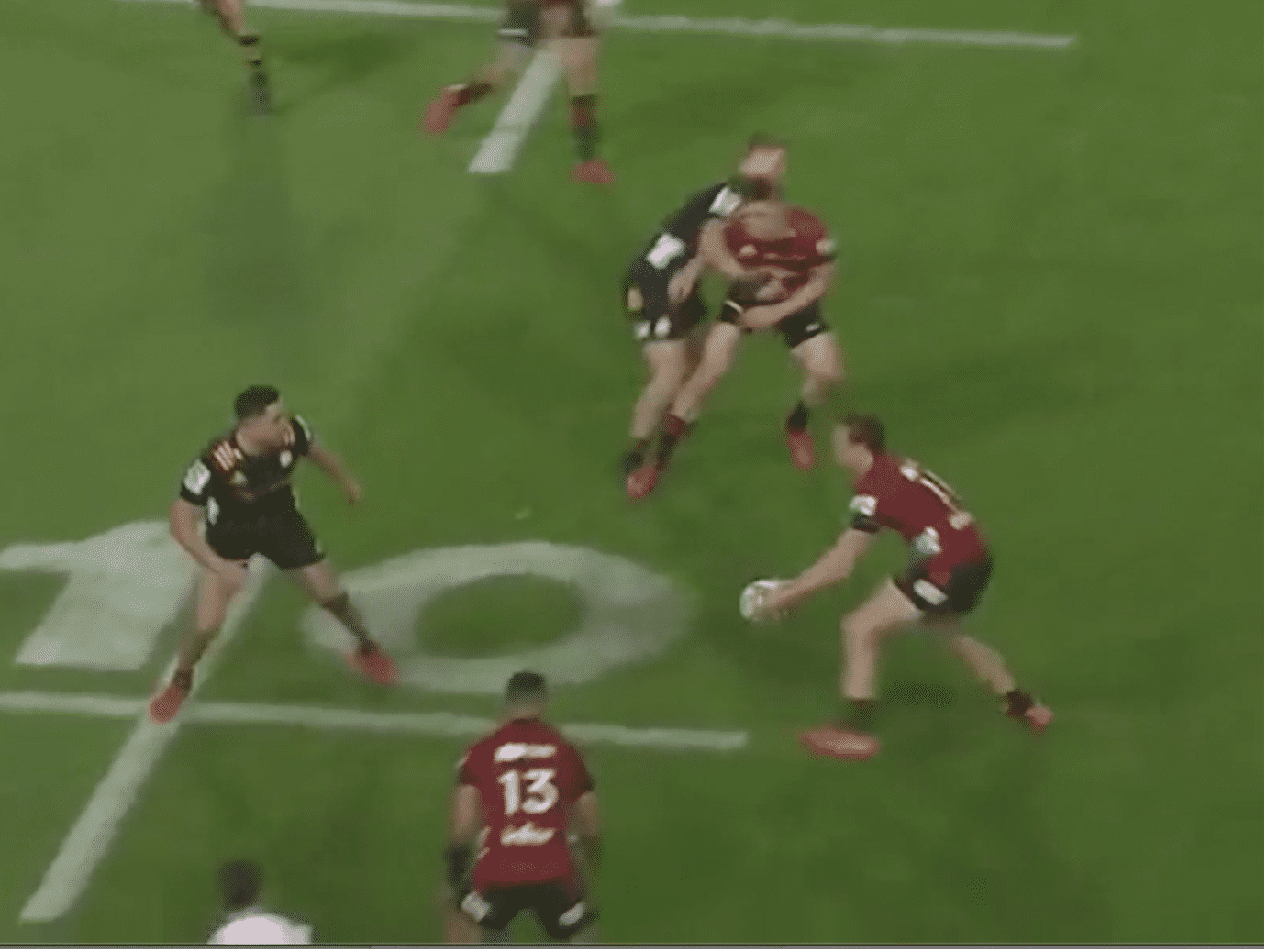 For super Will Jordan though this becomes an opportunity as Nankivell assumes Paea is about to be tackled by 2 defenders to set up a ruck, Jordan sneaks inside him and continues the linebreak.

Sanders, Christie and Drummond now all in close support while Goodhue and Reece are providing width and organising forwards for the next phase.

Sanders and Christie trip up (by accident) Tupou Vaa’I cutting across them leaving more space for Jordan, who probably should have went for the corner. 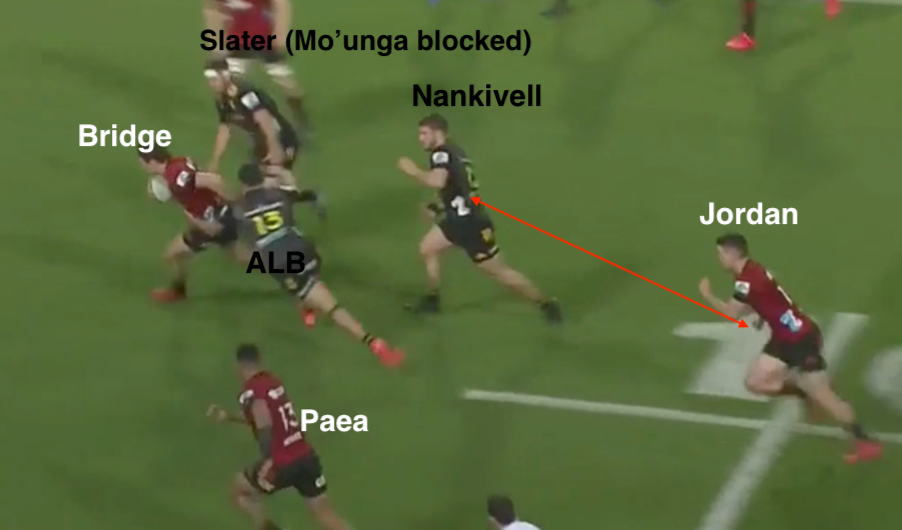 Jordan gets tackled on the line before the Chiefs cause a scrum turnover from the breakdown. So not even a try but it just goes to show how in-sync and in tune the Crusaders are with each other on transition allowing the most dangerous back 3 unit in the league to flourish. 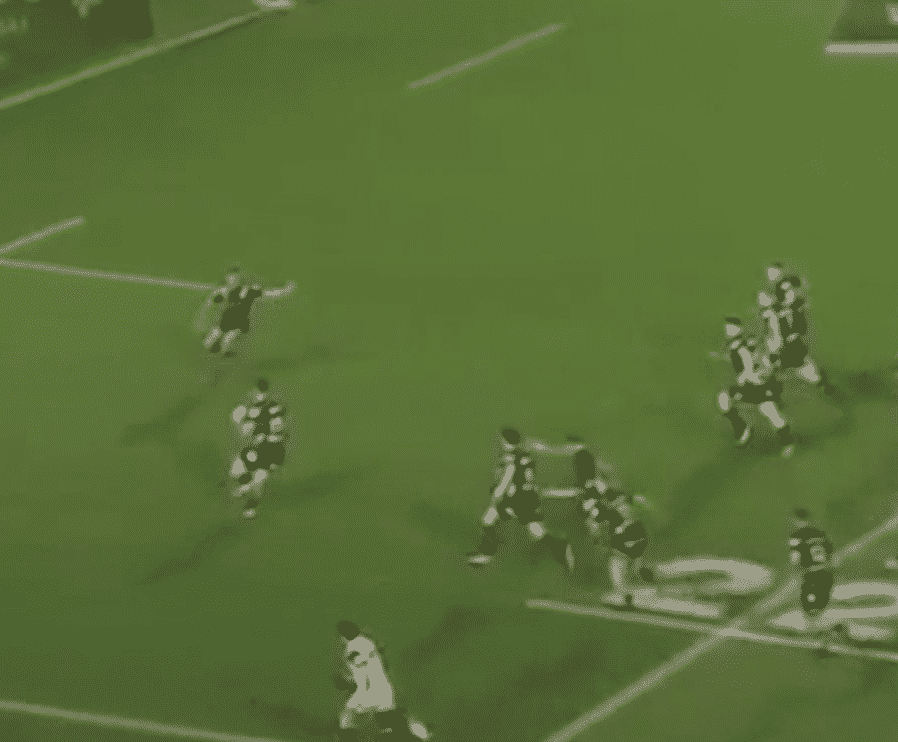 Want to see and interact with some more Super Rugby Content, join Brian Fitzpatrick of BF Sports Analysis and Ben Wylie of The Chase Rugby as we combine our 2 unique databases to deliver the most detailed Super Rugby Aotearoa preview ever.