In Numbers: All Ireland Final, Cork Constitution vs Clontarf – 5th May 2019

The All Ireland league final was held on Sunday 6th May in the Aviva Stadium between Cork Constitution and Clontarf. Shown on RTE (credit for images), it was an intriguing final and congratulations to Cork Constitution for winning.
This article analyses the match to why Cork Con won, what opportunities opened up and anything else interesting that came up.
BF Sports Analysis is doing analysis for AIL teams. Get in touch if you want to have your games analysed. 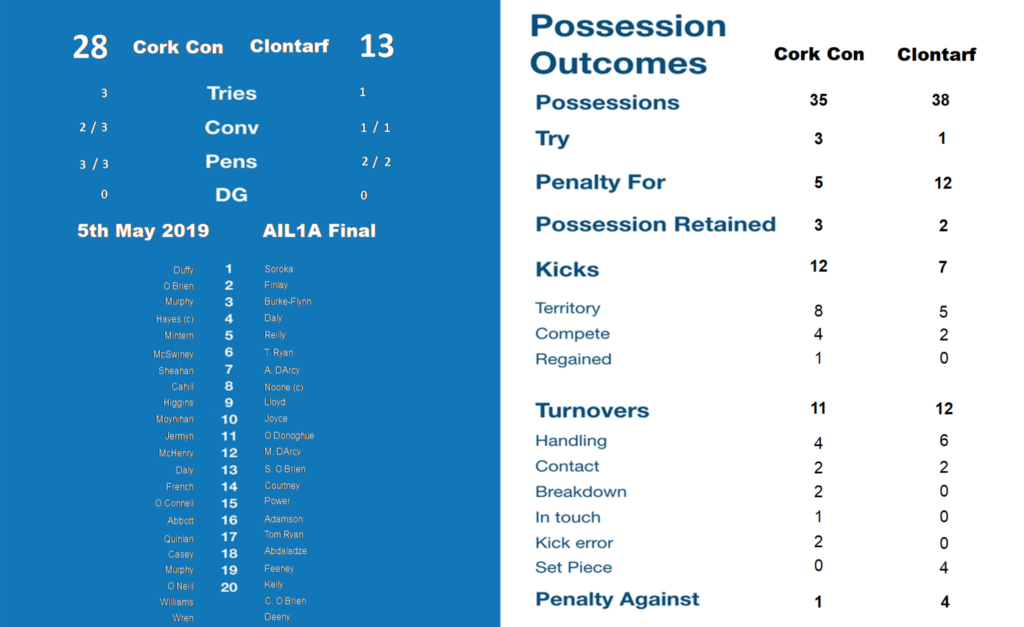 Looking at the possession outcomes, there are a few things that stand out.
Cork Con were more efficient in scoring tries with 8.6% to Clontarf’s 2.4% of their possessions.
Clontarf got a lot more penalties while in possession indicating they put Cork Con under a fair bit of pressure with the ball.
It is also notable that Clontarf had 6 handling error turnovers and 4 set piece ones.

First Try
Con’s first try came off a left hand side scrum on Clontarf’s. Credit to the Cork Con forwards for setting up clean ball to attack from.

Cork Con obviously did their analysis and decided to set up quite a narrow attack to leave as much space as possible for Ireland U20’s winger, Sean French on the outside.

From the kick, this is where Cork Con really switch on and take advantage of a defence not yet set.
Left wing, Jermyn pushes up to close down the space in the front line, then works hard to get back to support his full back, O’Connell.
Sean French also works across from the right wing to loop outside the full back holding 3 defenders.
Outside centre, Daly gives the Clontarf chase line another threat to worry about, spreading them out and slowing their chase line.
O’Connell runs toward the middle giving Cork Con options to attack both sides. 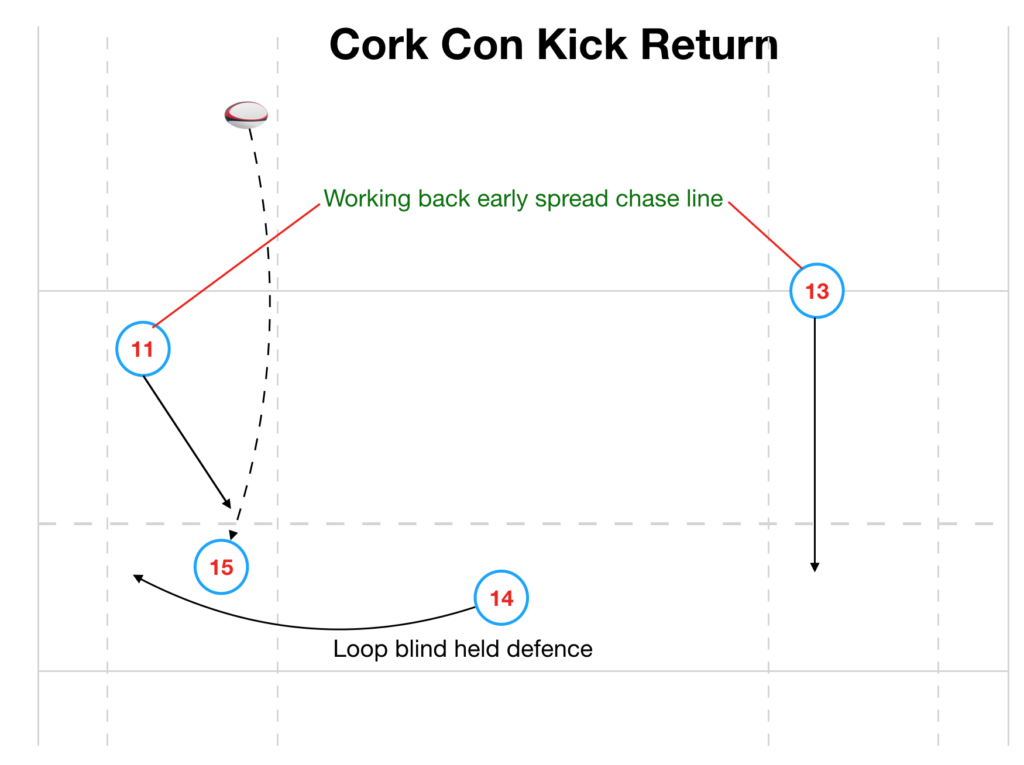 Clontarf lose 3 players to this ruck while Con commit 6.
Clontarf now had 6 men on the blindside defending just Sean French who has turned and worked back to his wing.
Clontarf 12 Matt D’Arcy recognises this and calls players back.

Scrum half, Angus Lloyd recognises the overlap too and tries to plug the defensive line. Despite the overlap, Cork Con’s Hugh Cahill attacks close by, possibly motivated by the numbers Con had committed to the ruck. Taking a wide outside line to disguise himself to Matt D’Arcy. Jermyn hangs behind the ruck, an unusual position from a kick return for most.
Jermyn, now doing his 3rd sprint of this phase sprints through the gap opened from Burke-Flynn having to tackle Cahill.
The try is then finished by Jermyn who covers roughly 110m in 27 seconds, being static for 3 seconds in the middle of the passage.
3rd Try
The Cork con 3rd try similarity showed quicker reaction times from a kick behind after a turnover and good support. Clontarf were just that bit slower to start racing back giving Con the opportunity. The former St.Fintan’s High School Hooker, Adamson does great work to catch Jermyn chasing back but Duncan Williams and Jermyn show some class offloading and supporting to finish off the try.

Clontarf game plan involved holding onto possession, a wise decision give how clinical Con are with ball in hand. Con countered this by defending narrowly.

Cork Con bringing some huge linespeed creating big hits behind the gainline. Leaving space out wide to get that linespeed. pic.twitter.com/QsvYQtzkJL

Although this left Cork Con vulnerable out wide, it did allow them to bring great linespeed, allow for double hits and get gainline when tarf attacked narrow.

Below is an example of Clontarf using the width well from a restart and getting rewards from it.

In the phase after, there was an opportunity to play back wide again with 2nd row Hayes and Cahill defending a whole half of the pitch. Unfortunately for Clontarf, all their backs were stacked on one side of the pitch from the restart. 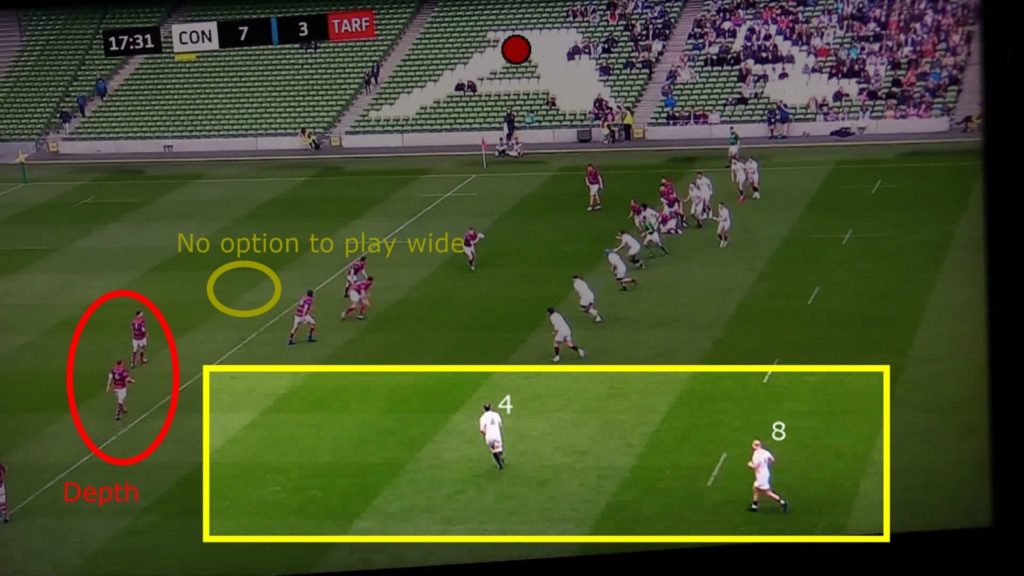 Without backs there to organise it is difficult to get the ball wide and perhaps give Courtney a crack at 2 forwards.
Not many international forwards are putting themselves in a position to be out the back of a pod of forwards so it’s understandable why it is so difficult to play wide-wide, particularly off a restart and is a credit to Cork Con that they recognised this and narrowed their defensive width off touchlines to help winning the contact area. 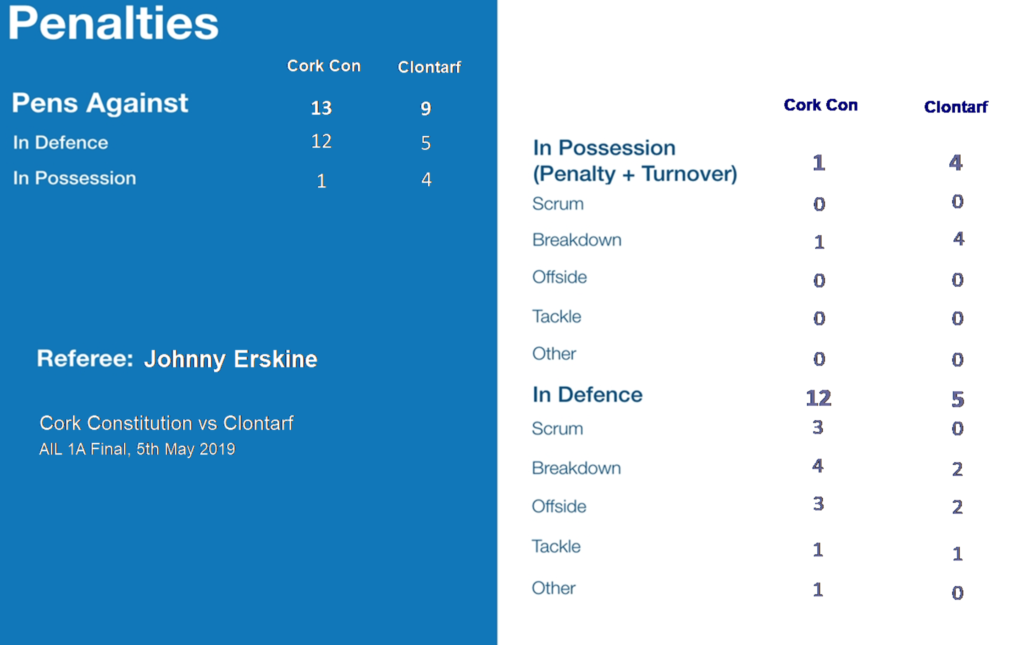 The most standout number here is the number of penalties Cork Con gave away in defence.

As indicated in the video above, Con were frustrating tarf with their post tackle work. often falling on the Clontarf side and disrupting how Clontarf approached the ruck. It’s a tactic often employed by Scotland as well. It might be the case where Con didn’t do this deliberately, but it had an effect in slowing down Clontarf’s ball but also in their penalty count. With Clontarf’s lineout not functioning as well as it could (discussed below), it had a big impact on disrupting Clontarf’s attack but it also led to yellow for Cork Con and Clontarf scored from a tap and go near the Cork Con line, albeit that penalty was for an offside.

Handling Errors
Clontarf had 6 handling errors leading to turnovers, 3 were individual errors that they would be disappointed with. Another was at the back of a scrum, another was an offload during a linebreak that if it went to hand could have led to a try scoring or at the very least an even bigger linebreak. The final one you can’t see the knock on from the television angles.
Lineout 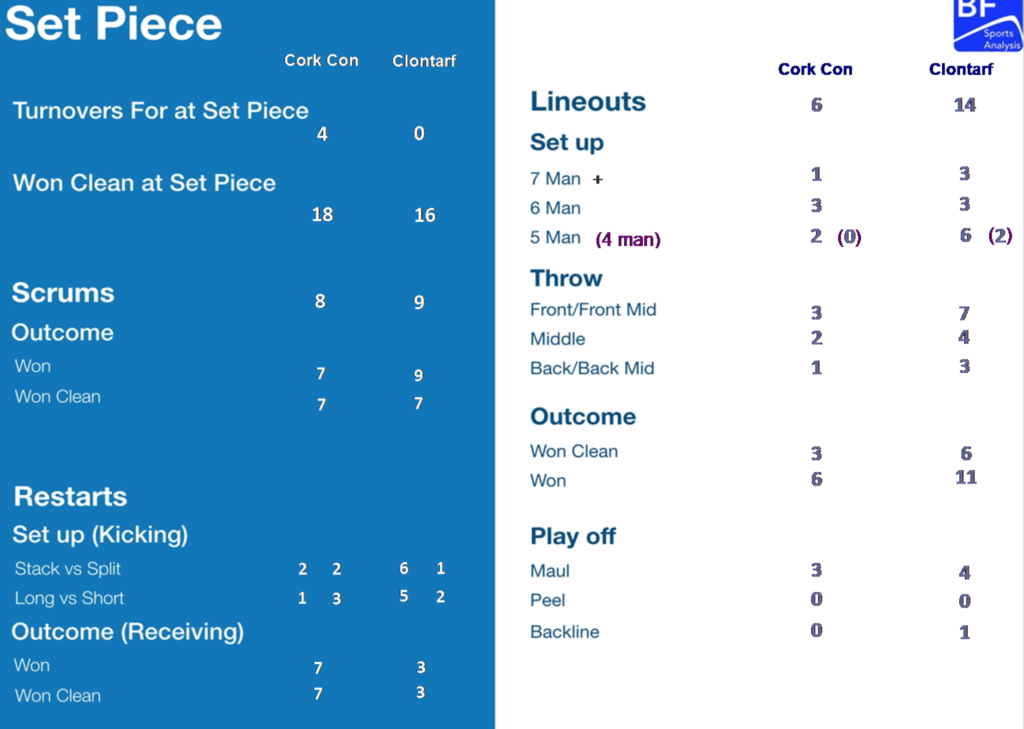 Clontarf’s lineout struggled in this match, although winning 79% of their lineouts they only produced clean ball 42% of the time.
This is a huge credit to Cork Con who obviously did their analysis on Clontarf’s lineout and knew how to disrupt it. Interestingly, all these tactics seemed connected. Their attack has it’s strengths in two very good wingers alongside a skilful backline, they leave those wingers with the most space in defence and attack to work with. They worked hard on winning the contact area in defence, particularly defending from a touchline. They competed in the tackle and at breakdowns to try get turnover ball to let their backs do damage with that unstructured turnover ball, illustrated in them scoring from a kick return and a turnover.

BF Sports Analysis is supporting All Ireland League clubs and clubs worldwide to use sports analysis effectively and efficiently. Contact bfitzpatrick@bfsportsanalysis.com for more information. Subscribe below on your phone or on the right on a desktop for more advice on how to use sports analysis well straight to your inbox.
If you enjoyed this article, you might also like this article on Ireland vs South Africa 2017, or this article on New Zealand’s Lineout in 2018.