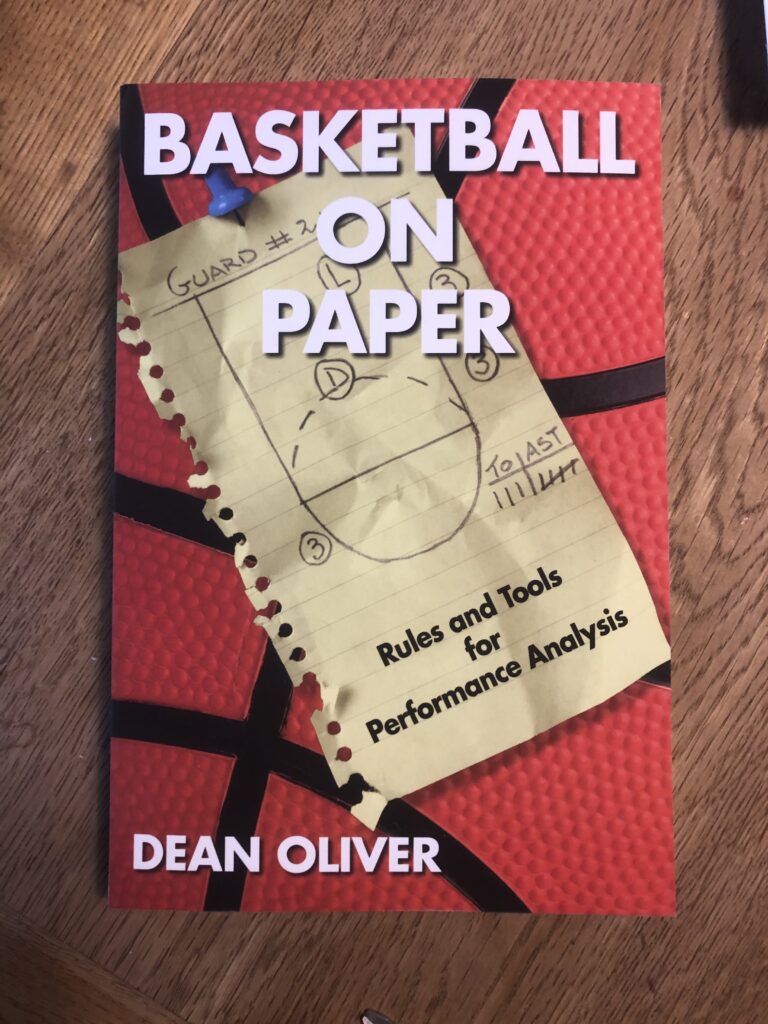 Below this review of Basketball on Paper, there are details on joining the BF Sports Analysis Book Club.

That paragraph took me 3 or 4 times reading to understand it, but it rung a lot of bells in my head once it clicked. I resonated as both the scientist and non-scientist. It reminds me of the things I used to dismiss and the things I have brought forward that have been dismissed. It also reminded me to be open to learning from different sources (scientists/non scientists).

Dean Oliver’s Basketball on Paper is an early look at statistics in basketball particularly looking at the 90s and early 2000s. It uses statistics to try rate players and teams and understand their fluctuations, impacts and the deeper why through that.

The book is aimed at primarily as basketball fanatics I would say, although it has applications in coaching and data analysis.

I have always seen Basketball as the elite level of sports analysis in invasion sports. Due to 82 games in a regular season with a 5 a side team, there is so much data and information to take from it as a sport.

In terms of specific learnings form this book. I learnt a lot more about ways to look at teams and individuals. Oliver used a stat a lot in the book which is now very commonly used in Basketball, which is Offensive/Defensive Rating. This rating looks at how many points a team would score/100 possessions. That is fairly basic analytical stuff. What is more interesting is how he adjusted each season to the league average. This allowed for comparison of the league against older years where teams were able to score on the fast break more often and shot quicker and therefore had more possessions per game.

This was of particular interest to BF Sports Analysis, as a business, we are now looking at comparing Rugby divisions across countries. At the moment, we are taking a deep dive and investigating Super Rugby Aotearoa 2020 in New Zealand. One of the big differences between Super Rugby and most leagues is the pace it is played at with an average of only 17% of phases going 3 phases or longer. This would effect our expected points (xP) model comparison. You can see more about our work in Super Rugby Aotearoa on our social media channels (Instagram|Twitter|facebook|LinkedIn).

The book goes deep into rating individuals, which is great in basketball again due to the high volume of data and skills that get replicated time after time compared to say rugby where a winger might do less than 10 tackles, carries or passes in a game. It is still interesting nonetheless particularly with stories attached to those statistics.

The other interesting point about this book is the timing of it – published in 2004. This was the pre-sprawlball era where 3 point shooting took over the NBA. The book hints at inefficiencies in playing the post up game and efficiencies in 3 point shooting with out moving to claim this was the way forward. The book looked at this from a different angle, possibly due to the personalities involved. Shaquille O’Neill, a physically dominant centre was a huge presence in the league back then and was a crucial park of the Lakers dominance then which gets discussed in the book. The book also slagged off the Golden State Warriors which also aged well!

I’m going to generally say “Yes”, it is quite a nerdy book and my vague knowledge of 90s NBA coincidentally topped up by Netflix’s “The Last Dance” at the time of reading made it more interesting understanding the narrative and historical moments in the book a bit better.

I would say if you’re not a basketball fan, I would probably recommend reading Sprawlball by Kirk Goldsberry first which is a lot more visual, easier to read and more recent (Review | Amazon Link).

This article contains affiliate links. That means if you purchase the book on amazon after clicking the link I get a small commission on it (please click on it!). This hasn’t in any way effected how I have reviewed the book or any other product on my website.

Want to see more book reviews? Click here. If you want to stay updated on content from BF Sports Analysis, subscribe on the right on a desktop device or below on a mobile device. Updates are roughly once every one or two months.

BF Sports Analysis Book Club is launching! The idea behind it is to try get more out of each book by discussing it with others and learning from each other about different ways to look at and approach analysis. The next book being read is The Only Rule Is: It Has to Work. The discussion on this will take place in mid-October 2020. Please email bfitzpatrick@bfsportsanalysis.com if you wish to be part of the book club.