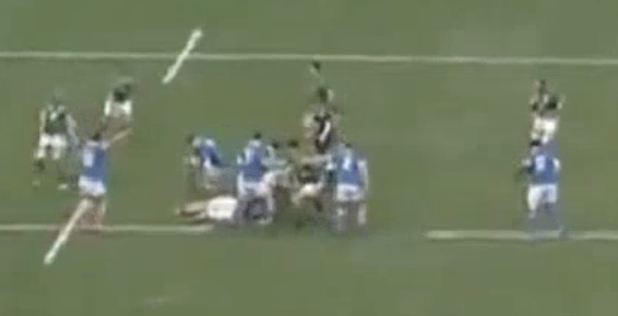 How did Campagnaro Read that?

By Brian_FitzpatrickNovember 6, 2018October 2nd, 2020No Comments

This article looks at the try scored by Michele Campagnaro in Ireland’s victory over Italy in Soldier Field. It comes from an intercept off one of Joe Schmidt’s famous strike plays. Showing where Ireland fell down in execution and how it led to Campagnaro’s fantastic read.
See the try here

It’s difficult to see from the TV cameras, but Ireland seem to have set up with a 7 man lineout. 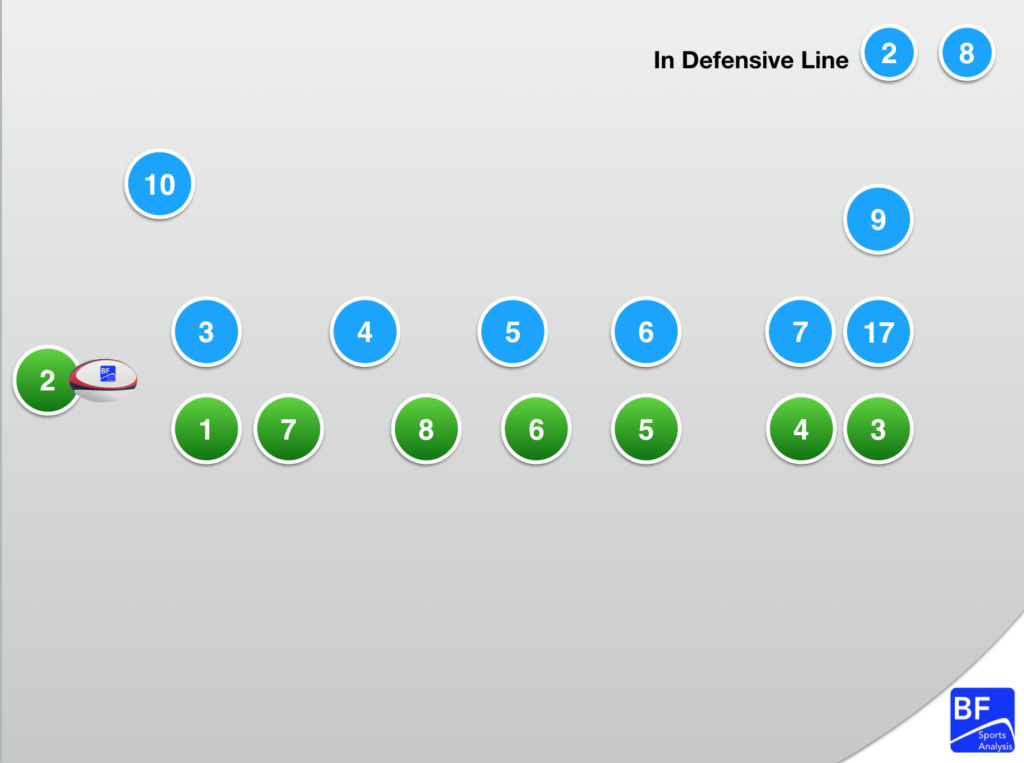 Italy, interestingly set up with what seems to have been 6 men in their defensive lineout. Carlo Canna, the 10 operating in the 5 metre channel and 9, Tito Tebaldi at the back as tail gunner. This allowed Hooker, Luca Bigi and number 8, Renato Giammarioli to join the defensive line. 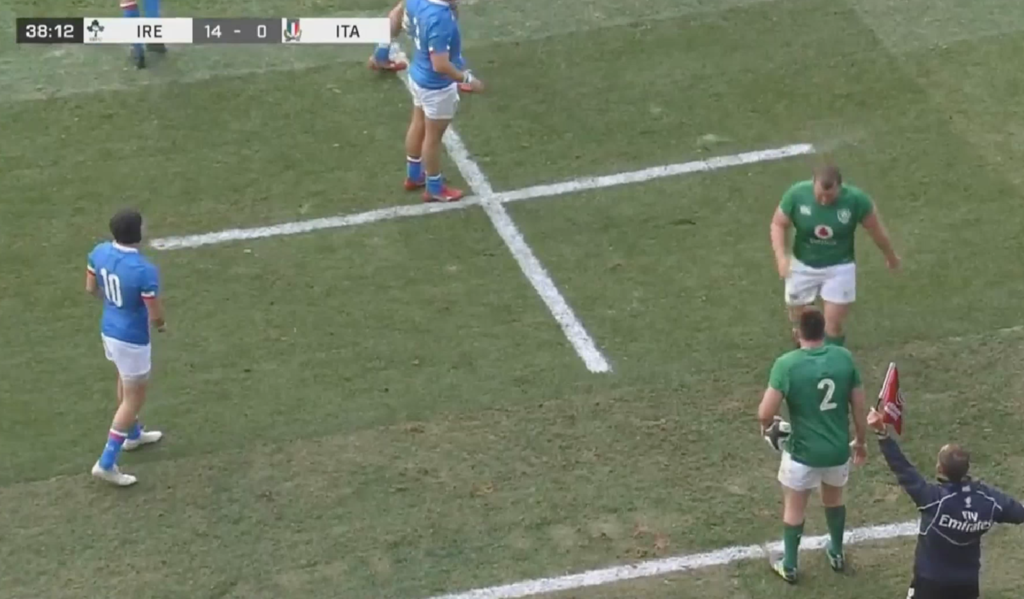 Italy set up to compete with Tadgh Beirne at the back, giving Ireland possession at the front.

This set up’s strength is the ability to defend the seam between lineout and defensive line and allows a lot of aggression in the defensive line with being a number up. It also makes switching direction after the 1stphase more difficult for the attack with a back already in place, who are typically better at defending the edge there.
The weaknesses of this set up is that you’re handing Ireland possession and that you are a number down or at the very least, 1 arriving a few seconds later to defend the maul.
Despite this, Van Der Flier (7) steps out and Jack McGrath comes forward and lifts Jack Conan at the front middle and plays off the top to Luke McGrath to Joey Carbery who quickly passes onto Bundee Aki running in between the hooker and number 8 that Italy left out of their lineout. 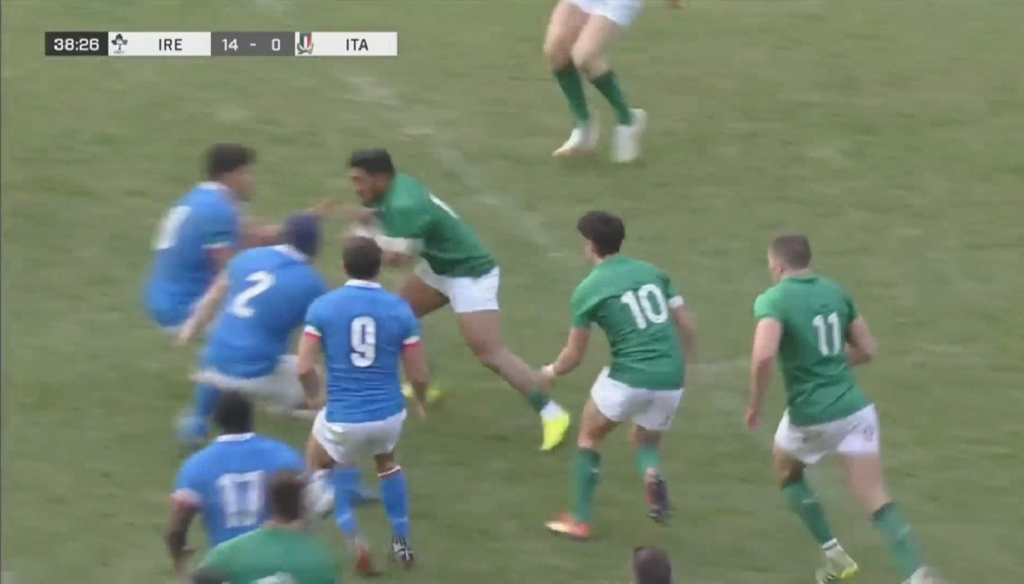 Ireland play around the corner twice, hitting Rhys Ruddock and then Jack Conan with 3 players designated to clean each time.
Defensively, Italy automatically folded 4 players around the corner on the 1stphase, splitting their forwards across pitch. After Number 8, Renato Giammarioli gets up from his tackle on first phase, he swaps outwards on the blindside with tight 5 forwards, Tight Head – Tiziano Pasquali and 2ndrow – Marco Fuser. This meant Canna on the defensive right hand side would be supported with a bit more pace should Ireland go wide, but this also left Italy with the front row trio of Luca Bigi, Cherif Traore and Tiziano Pasquali to the defensive right of the 3rdruck where Ireland target.

As Jack Conan takes it into contact Jack McGrath and Niall Scannell are designated to clear out. Neither do a good job at clearing the threat of Luca Morisi, the Italian 12. With them both driving him in opposing directions and do enough for Ireland to retain the ball although not as cleanly as they would have liked. 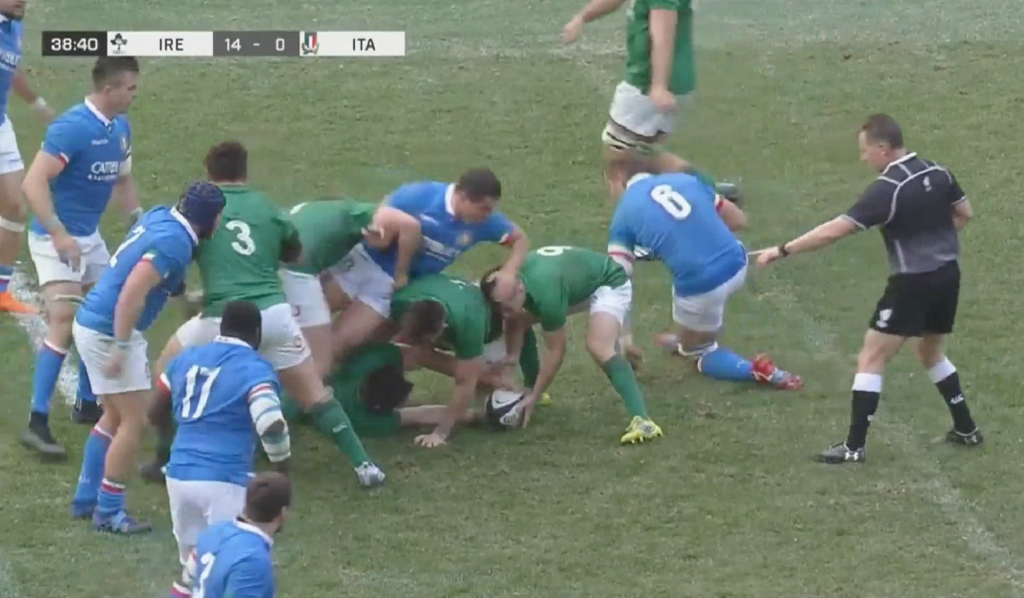 Andrew Porter, the 3rd designated cleaner arriving at the breakdown had a more subtle role that Luke Fitzgerald noted in commentary.  His role was to get a bit further past the ruck to prevent the defender folding, in this case, Flanker Abraham Steyn. Porter does this well, nudging Italian flanker Abraham Steyn back 2m opening up a hole for Larmour to go through.

Tadgh Beirne and Quinn Roux’s roles were to get around the corner on the far side. Neither do this with much animation or realistic ball carrying running lines. Ireland could have actually done a lot of damage on this side with a 3 vs 2 of Beirne, Roux and Conway available but Ireland followed through with the move either way.

You can also see, Andrew Conway and Josh Van Der Flier already running lines to support the linebreak either side.

Trying to get inside Campagnaro’s head. He seems to have read this play quite early. He begins telling Abraham Steyn and his team mates to fold back to the other side almost immediately once the tackle is complete. He has a few cues that would have led him to this.

Campagnaro would have been marking Larmour as this 3rd phase got around the corner and would have been keeping an eye on his movements. Larmour’s positioning suggests Ireland are looking to attack the far side of the breakdown or at least raise some suspicion as to why Larmour isn’t looking at the space in front of him

Italy seem to primarily have a ball focus defence (read a little more here about Ronan O’Gara discussing this). This would leave Campagnaro interested in what Luke McGrath was doing and how he was going to pick the ball up. From arriving at the ruck, it became fairly evident that McGrath was likely to be passing to his left.

As Tadgh Beirne and Quinn Roux came around the corner, their body language, shallow line and their focus towards the ball would not have applied much of a distraction to Campagnaro.

As Campagnaro was instructing Steyn to go back to the other side of the ruck he might have noticed that Porter was trying to open up a gap there.  His ability to notice to fill that hole while Steyn was been taken out was extremely clever.

Perhaps only one or a few of these cues provided Campagnaro with enough information to make the read he did. What was most impressive was that he did it in 4 seconds from recognition to execution. This great piece of reactive work indicates a bit homework was done and he was expecting it or perhaps the cues were just enough for him to make that read.
It was an immensely impressive bit of play that brought Italy back within 7 points just before the half time whistle. Ultimately Ireland won comfortably but an interesting event that could have led to a very different outcome should he have not made that read.

With this interception and read of this play. It’ll be interesting to see how Joe Schmidt uses this move in future, memorably used intitally back in 2014 when Rob Kearney scored under the sticks vs England at Twickenham which I was lucky enough to be in attendance at!


He’ll likely add more animation and distraction on the other side of the breakdown to start. Perhaps he’ll move the the strike runner into position later or include another cleaner with another blocking role. Perhaps the option will stay the same but with the players coming around the corner becoming an option if it becomes a 2 vs 3.

Hope you enjoyed this article. This website helps coaches and analysts use performance analysis better with more content being delivered coming up to Christmas. Please subscribe to the right on a desktop or below on your phone for updates. If you would like to see more content, go to our article’s page.