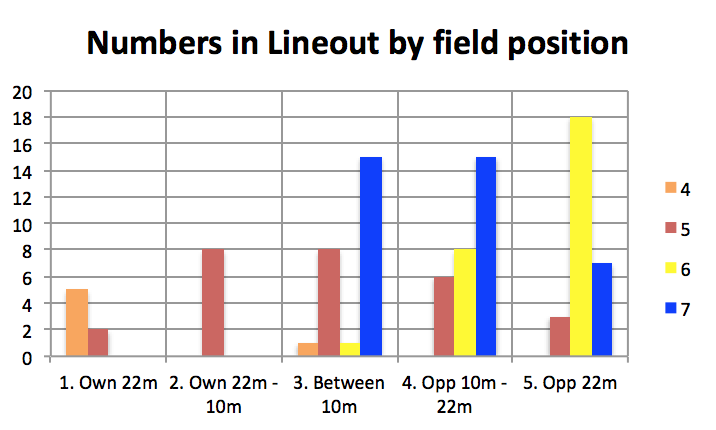 82% (81/99)
New Zealand’s lineout success rate for the Rugby Championship and November Internationals.
Number one and number two in the world play each other in most anticipated test match of the November Internationals, Ireland vs New Zealand at the Aviva Stadium. A lot of the discussion leading into this has been around how New Zealand tore England’s lineout apart last week and Ireland starting Devin Toner this week after some difficulties the week before vs Argentina in that area where the Pumas started with a second row in the back row to compete more there.
The scope of this was to look at New Zealand’s games so far in the November Internationals and also the Rugby Championship of 2018. The French Summer Tour was not included due to time constraints.
I looked at this from a perspective of ‘how can we steal ball off them’. This has limitations in that it ignores what happens beyond the lineout and if strategy should reflect that.
New Zealand on average this season have had 12 lineouts per game meaning Ireland should expect to steal about 2 if New Zealand keep their lineout success percentages as they are for this game.
Initially this looks at how New Zealand set up their lineout, followed by where and who they are likely to throw it to.

How they set up 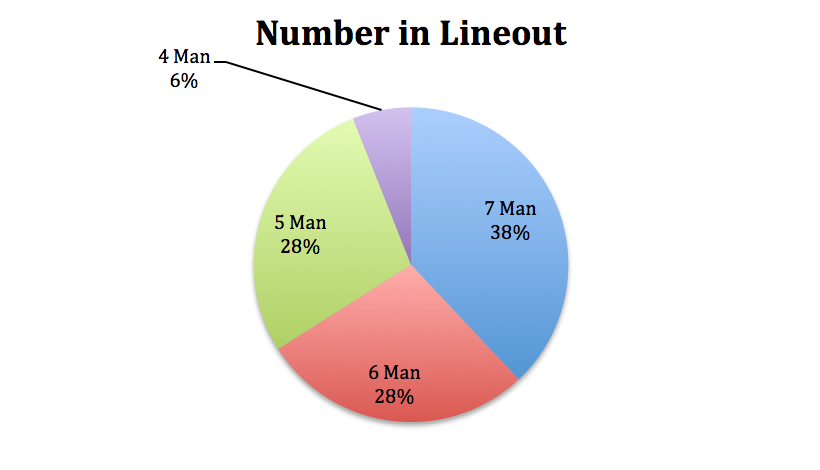 Chart 1
From Chart 1, it’s clear New Zealand’s preffered set up is a 7 man. The formation of this varies a lot but tends to be a spread, perhaps a 1-4-2 as seen in Picture 1 below. 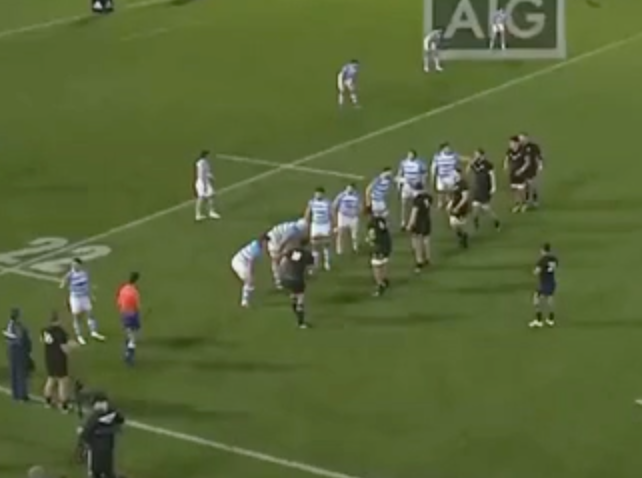 Picture 1
This formation backs their ability to be quicker than their opponents in the air by making them defend across the lineout and not in specific areas – as you would with any formation involving a pod of 3 ready to lift.
When they set up in a 6 or 5 man lineout – 87% of the time, they do so using a forward in the scrum half position known as a +1.  As demonstrated below by Sam Cane on the right of Picture 2. 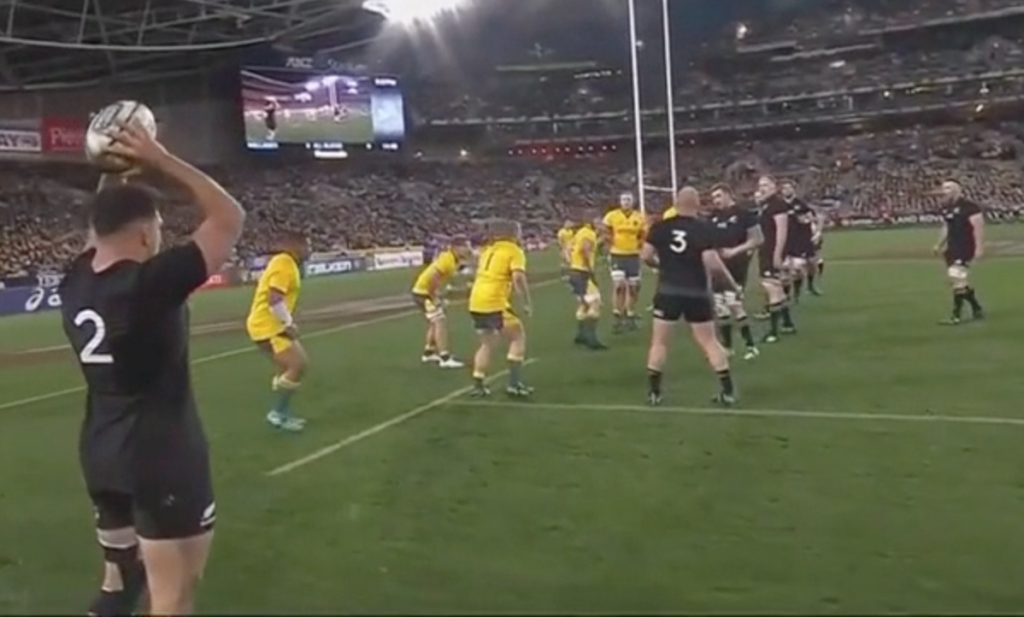 Picture 2
Knowing how New Zealand set up, the next step is to investigate what influences their decision to use different numbers.

One factor that influences New Zealand’s decision on how many numbers to have in their attacking lineouts is field position, as outlined in Chart 2 below.

Chart 2
With less numbers in the lineout – this provides the opposition with less jumpers and more space to cover, although less room for deception and movement. This indicates New Zealand prioritise winning lineouts in their own half and in turn have a preference for holding defenders in towards the touchline or having more players ready to maul nearer the opposition line.
For comparision, see Chart 3 below to see where the opposition are most likely to compete. 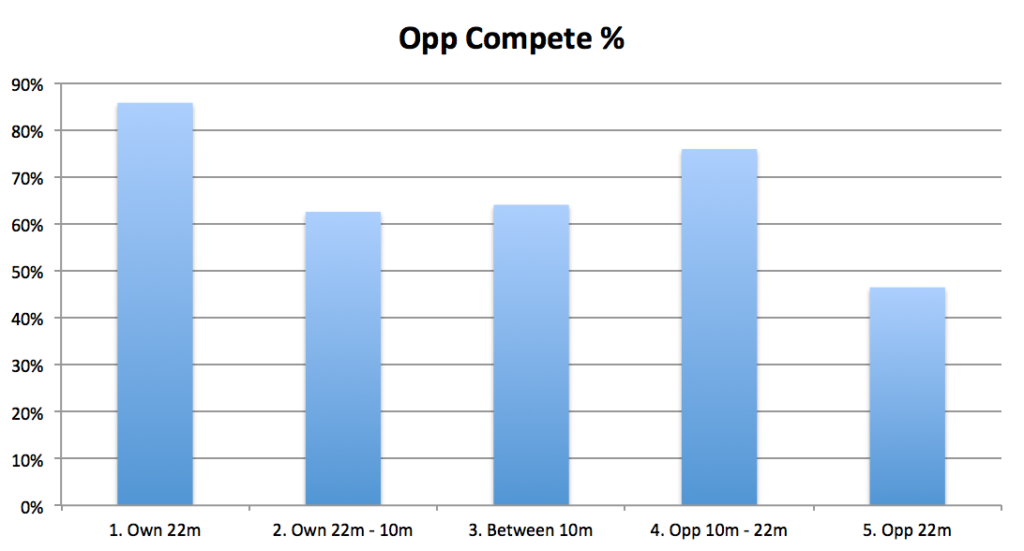 Winning % by set up

Table 1 below shows the percentage of lineouts won with each set up. New Zealand are dominant with their 7 mans with a 95% win rate but are weaker with their 6 man lineouts with a 70% win rate.

Table 1
Now that we know how New Zealand set up in various parts of the pitch and where the opposition is likely compete, the next question is to see where and who New Zealand throw to.

Table 2
New Zealand have a lot of variety to their throw, and it’s not as simple as saying to compete in this area and you’ll win the ball. Kieran Read will be judging body language and positioning of the opposition lineout defence to consider where he calls Codie Taylor to throw.
New Zealand do have certain biases. Throwing to back or back middle just over half the time between the opposition 10m and 22m lines and rarely throwing to the front, just 7% of the time. Hence the higher competition they receive in those areas of the pitch.
Also, between the the 10m lines, New Zealand are 44% likely to throw to the front.
To look deeper into how Keiran Read makes decisions on where to call the throw, we can investigate where the opposition defend and compete within the lineout. 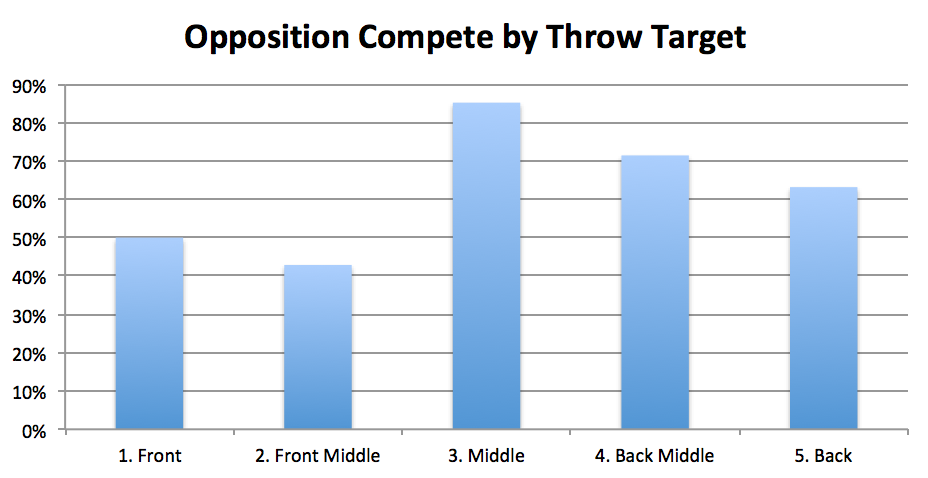 Chart 4
Knowing where New Zealand’s biases are for throw length and where their opposition compete, to further analyse where they are likely to throw, it makes sense to look at the players’ involved to see if there is biases there too.

Who do they throw to?

Table 3
Taking out the players that are not involved against Ireland this weekend, Kieran Read, pictured below in Picture 3, calls the ball to be thrown to him 40% of the time with Sam Whitelock, Brodie Retallick and Scott Barrett as his more or less 2ndchoices with percentages of takes at 16.25% – 15%, seen in the figures in Table 3 above. 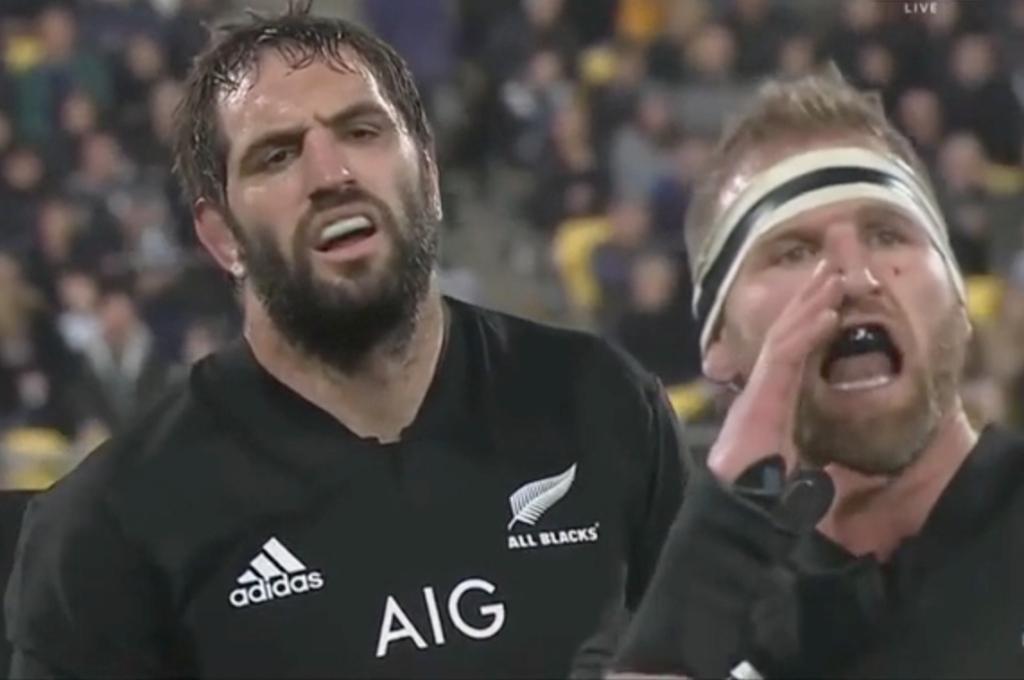 I’ve defined movements as one player switching position within their previous lineout structure or all 3 players moving in the lifting/jumping pod of 3. If the jumper stayed in spot and one or both of the lifters moved to the jumper, this was not considered a movement.

Table 4
Table 4 above indicates that New Zealand don’t introduce a lot of movement, although it varies quite significantly in different sections of the pitch with it used only 22% of the time between the 10m lines and 63% of the time between their own 22m and 10m line.
This seems to sync with table 2, indicating that New Zealand use movement when they want to throw to the back. Which they do as highlighted in Table 5. When New Zealand use movement, 43% of the time they are throwing to the Back Middle or Back as opposed to 25% when they don’t move.

There are ways to disrupt the New Zealand lineout.
Namely:

This article was a demonstration of the use of statistics in rugby to give an example of using quantifiable data to provide different perspective than the more common qualitative analysis often provided, such as in my article last week on Italy’s Campagnaro’s try vs Ireland and how he made that read for an intercept.
Both methods enhance each other by improving the context of one another to allow for more complete and varied information when making decisions or trying to understand something.

If you would like to play with or enhance the raw data collected, here is a link to an excel spreadsheet for you. As you can see there is some data collected that was not used in this article such as how New Zealand played off the lineout.
If you enjoyed this article, please feel free to subscribe to our newsletter. Below on mobile and to the right on a desktop device.
Otherwise, please feel free to browse through more of our articles on this page here.