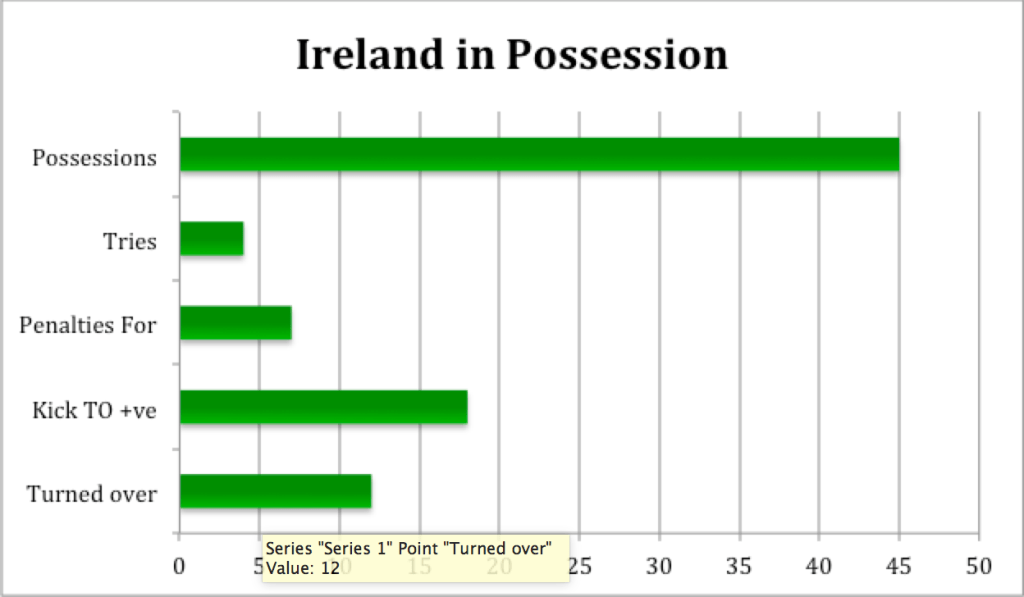 How to Analyse a Rugby Match – Ireland vs South Africa 2017

“It’s not about how much possession you have, it’s about what you do with it that counts”
Like all things you measure, there should be a purpose as to why you measure it and an understanding to what will change depending on the results.
The purpose of this article is to identify the easiest ways for Ireland to improve their attack for next week and hence what they should do at training this week.
Possession is traditionally presented in a percentage format, calculated by the amount of time a team is in possession versus the other. My belief is a more useful way of presenting this statistic is in the number of possessions had. This allows you to relate what you did in possession a lot better.
In Ireland vs South Africa, Ireland had possession of the ball 45 times. They scored 4 tries, giving them a try to possession scoring rate of 9%.
This is quite high, from a much different level of I have experienced averages of about 6 or 7%, typically the winning team would have 9-12%, but in 50-0+ victories the scoring rate could be in the mid teens to early 20s.
Crucially, Ireland also got 3 penalties in possession that led to successful 3 points opportunities. Thus giving Ireland an adjusted scoring rate of 17%.
Ireland were very clinical, they took 4 of their 5 their chances, with the 5th leading to a penalty in front of the sticks and executed well. These tries came from 1 contested kick, 1 kick to regain off a turnover and 2 from lineouts.
The kick to contest was very fortuitous in that Ireland scored directly from the regain. Usually with a box kick, the aim is to regain the ball and play against a retreating defence. In the event that you don’t regain the ball from the kick, you have an opportunity to isolate a winger with numerous players chasing the kick and then contesting the ruck to regain possession and attack from further up the field against a disorganised defence.
The most likely outcome is that you tackle the winger and they retain the ball and have a very difficult platform to attack from so likely results in you receiving a counter attacking opportunity. This box kicking tactic is what Saracens have built their game plan from.
Ireland used another type of kick to gain these same results – a cross kick, generally speaking, a more difficult kick to execute but with higher rewards as the catcher will be in more space if they catch it. We’ll video analyse a breakdown of why this was successful.
Ireland were defending a scrum but a South African handling error allowed Jacob Stockdale to make a few extra yards.
Crucially, with the South African’s attacking, their full back and wing were in the line and therefore taking down Stockdale and the left wing had to cover across to the middle of the backfield. 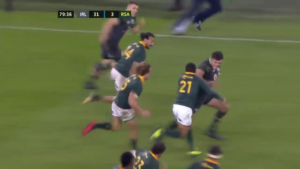 RTÉ commentator Ryle Nugent notes that Darren Sweetnam is calling for a cross kick, Joey Carbery duly delivers a beautiful kick to space while South African defence worry about Stockdale’s break and Sean O’Brien’s powerful pick and go.
The risk with a crossfield kick is that you do get caught, isolated and turned over.
Sweetnam does very well on the ground to prevent that, wriggling forward in the ‘score the try’ ball presentation before reaching back to present clean ball to Marmion. Rob Herring the front row forward giving speedster Sweetnam a head start catches up to him a discomforting 3 seconds after Sweetnam is tackled but when he gets there, he does some fantastic work at ruck time. He comes in and takes the Springbok centre Jesse Kriel, making it a one man ruck win with quick ball for Ireland.
James Ryan gives Ireland go forward again, incredibly taking out 3 defenders and producing quick ball, over the gainline with no South African defenders given time to fold with the exception of Pollard – who doesn’t anyway. Kilcoyne then gives a ball out the back for Carbery, Henshaw and Conway to link up and put Stockdale in the corner.

From my own research 6% of turnovers in rugby lead to tries and this gets higher the lower the standard you get.

So Ireland were incredibly clinical in taking their chances, so we’ll look at some depth into how they can create more chances.
Initially we’ll look at how they lost the ball. They had 6 knock ons, 2 poor kicks, an intercept and 3 penalties against while in possession. On initial viewing, it seems as though that is nothing out of the ordinary and it isn’t statistically but when you look back through these turnovers you’ll find Rob Kearney get turned over from a kick return, Conor Murray knocking on at the back of a ruck and Rhys Ruddock holding on. So some tidying up on ball presentation and earlier arrival at the breakdown may be looked at, although as highlighted above there were some very good examples of that as well.
So to look at what Ireland would like to improve in attack, we’ll have to look outside basic possession outcome statistics to get some more detail. To do this, we can go into more detailed statistics or we can use the traditional method of observation.
From my observations, I thought Ireland had opportunities to use wide spaces more and these were down to individual events.
My first example is a 3 vs 1+1 on the short side with Iain Henderson.

A little tap on here would have given Ireland some extra go forward and potentially given more opportunity to score later in the set of phases.
Another example is after Ireland make a half break through Stockdale on the left hand side, they play a tip on off Sean O’Brien to Tadgh Furlong. Looking at this picture and the phase after picture, I think Ireland could have done a lot of damage wider out. 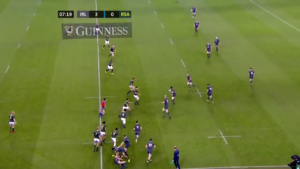 If the ball from O’Brien went out the back to Sexton, there would be great potential to stress the Springboks wide given the space there, with either a crossfield or some quick passing. 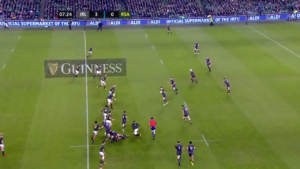 The second phase presents a similar opportunity that results in Sexton taking the ball into contact.
Sean O’Brien mentioned in his post match interview that Ireland’s game plan involved keeping hold of the ball, so this would indicate that Ireland were not prepared to move the ball as much as they could have.

In this article, we have gone through different ways of analysing a game; statistical, video and live observation and thoughts giving examples of how Ireland might look at this. There are numerous ways to analyse and interpret a rugby match and this is just one sample of such a way to do it.
They will likely focus on strategies specific to the Fiji game with a focus on creating more opportunities to score for their attacking training focus this week.
If you wish to do some analysis on your team in a similar way to how I did it, I have created a spreadsheet you can download and use.
Again, if you wish to be notified about more high quality analysis content such as my follow up article on How Eddie Jones’ England might have prepared for their training camp in Portugal, then please subscribe to my site, below on mobile or to the right on desktop.