“We don’t quite have the same size and strength as our opponents so we wanted to play with a bit of tempo and it was really difficult to do that to be honest” said Joe Schmidt, discussing Fiji causing frustration at the breakdown for Ireland post game.

Ireland struggled in their attacking breakdown this week. It did not take a statistical analysis such as I demonstrated in last weeks article to discover that.

In this article we’ll look at why Fiji attacked Ireland there, what were the root causes of this problem and the future impact of this weakness exposure.

Why Fiji targeted Ireland at the Breakdown

Much of Ireland’s breakdown malfunction comes down to the excellent Fijian counter rucking. The reason they targeted Ireland in this area is due to the individuals involved on both sides and Ireland’s with the ball strategy.

Ireland were lacking in experience internationally; Chris Farrell made his debut, Darren Sweetnam his first start, Andrew Conway his first start at full back, Stuart McCloskey had his 2nd cap after a year and a half. Fiji on the other hand had one of the best wingers in the game in Nemani Nandolo, his Montpellier club mate Timoci Nagusa and La Rochelle club mates; Kini Murimurivalu and Levani Botia.

Ireland picked 2 very strong running centres in Chris Farrell and Stuart McCloskey. Neither players’ strong point is long passing, so Ireland were likely to rely more so on the excellent Joey Carbery to provide width to their game. With these elements in mind, Fiji would have backed themselves to defend that area easier than other parts of the game.

With Ireland not having Johnny Sexton on the pitch it also meant that they lost some range with their goal kicking and kicks to touch, making giving away penalties less punitive than normal against Ireland.

An area of high priority for Ireland is keeping hold of the ball for long periods of time to wear down the opposition as highlighted by Sean O’Brien’s post match interview last week.

Ireland keep hold of the ball by attacking narrow, one-out from the ruck. They attack here with momentum in 2s usually with the likes of Iain Henderson and Sean O’Brien carrying.

It is a low risk strategy that creeps them over the gainline, involves a simple pass and is difficult for the defence to get off the line for. It is quite simple to defend against but it tires the defenders out, prevents them from making dominant tackles as they soak in the attacker with momentum.

From a 2008 study on the number of contacts in the South African Vodacom Cup rugby by van Rooyen et al., it was concluded that losing teams make contact with the ground more frequently than the winning team – this demonstrates that losing teams are subjected to being forced onto the ground by the opposition with greater frequency, landing on the bottom of a tackle, missing tackles, being off your feet more leaving you out of the game for longer periods of time.

What this attacking strategy does is, it allows for Fiji to stack this area with more players and to allow them to counter ruck if they manage to put in an effective tackle. Which they did so effectively and hence why Ireland scored 2 of their tries in the corner.

Delving into the ruck, ultimately, teams are trying to retain the ball and get the ball back as quick as possible. Ireland had 32 out of 125 not producing quick ball or a penalty for.

We’re going to break it down into different segments to see how Ireland lost the ball or did not get it back quickly. Initially there is the ball carry, secondly the groundwork (moving and placing the ball), then the ruck and moving the ball away. There is some secondary goals to the ruck as well to be discussed.

The ball carry has a huge effect on how the rest of ruck plays out. As highlighted in last weeks article – James Ryan’s carry took out 3 defenders and still produced quick ball, leaving more numbers over for Ireland to finish off with Stockdale in the corner.

Part of ball carrying is the decision to ball carry, Ireland twice got put under pressure due to Keiran Marmion picking and looking for a pass inside – one time, Dave Kearney received it and got tackled hard leading to slow ball.

The other time, Marmion picks and snipes from the ruck. He has Chris Farrell on his outside, Rhys Ruddock on his inside. He looks inside as he straightens up and sees that Talemaitoga Tuapati has underhooked from the farside of the ruck as is standard practice for most teams and has covered Rhys Ruddock. Marmion does not have time to have a second look to his outside so decides to straighten up himself. Akapusi Qera, the Fijian captain has lined up Marmion and sends him backwards.

Chris Farrell and Rhys Ruddock have both overran Marmion, Leaving Jordi Murphy to try hold off the excellent counter ruck of Lepani Botia and Timoci Nagusa.

Murphy has a difficult job here, he has to hold up 2 Fijians with momentum coming at him by himself. He can help himself here by getting his legs further back and allowing him to soak more weight before being bowled over. 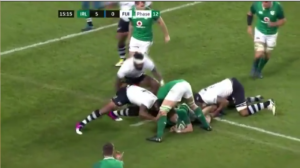 As analysts, we’re looking to find easy things to change to bring improvements. In this case, the easiest thing to change is how we ball carry, or specifically the decision to carry.

With this move, you are hoping to find a soft shoulder. Generally speaking, you’re not going to have a scrum half who can run over forwards (Exception being Connor Murray – hence why Ireland would play off 9 running close to the opposition tryline) so he needs to run through a gap. Marmion needs to attack and try to out pace a forward in this incidence as he did for his famous try vs Leinster in 2014. This should worst case, allow for him to be tackled sideways and into the path of Chris Farrell in support.

A big problem with this move for Ireland is that as stated earlier, with their attacks off 9, teams tend to stack this area making it incredibly difficult for them to break them down in this area.

Chris Farrell and Rhys Ruddock both need to react quicker here for Ireland to keep hold of the ball but Ireland were originally put under pressure by their ball carrying and attacking decision.

In this 2nd clip, Marmion has just done some great work diving on a loose ball from a kick off, hence why Jordi Murphy is playing the ball from the base of the ruck. Rhys Ruddock has an OK carry and both Jack McGrath and Jordi Murphy follow up with some fantastic rucking taking 2 Fijians off their feet giving Ireland more room for attack their attack.

Unfortunately for Ireland, Ultan Dillane does not have any support as he steps over the ball. Similarly to Jordi Murphy before, there is room for improvement in his body position.

But a more pressing issue is why has no one else recognised that Keiran Marmion is at the bottom of a ruck and decided to step in and move the ball themselves.

Between Joey Carbery, Devin Toner and Rob Herring. One of them should have know that this needed to be covered, if not them the communication should still have been made from further out the pitch to inform them.

This was not the only time Ireland’s attack slowed down due to Marmion being on the ground and is something Ireland will have to look at solutions for if they want to play with the tempo Joe Schmidt talked about in his post match interview.

I’m not going to go through all 32 clips, but there was no single issue on Ireland’s breakdown work that stood out. All elements of their ball carrying, groundwork, support play and ball movement had a big impact on their ball retention and will no doubt be discussed and worked on this week in training,

Although these weaknesses represent a more or less 2nd string Ireland team, they still highlight areas teams can attack in future. Teams will likely test Ireland more in this area seeing as how much it unsettled them, albeit Ireland will have different personnel and a better ability to cope with this emphasis.

This could present opportunities to Ireland with teams condensing their defence and leaving more space wide which Ireland can exploit through Sexton’s kicking game, Ireland’s winger’s pace or even a little more on the edge of defence with the likes of Garry Ringrose.

Positively, most of the issues are quite fixable. Ireland can decide not to use an inside ball off 9 when they know the opposition underhook the 1st man on the farside of the ruck and they can work on their groundwork which is one of many no talent skills in rugby. It takes a longer time to develop decision making under pressure and improving your ball carrying abilities but they will come with experience to these younger players. This will likely be Ireland’s most understrength team until after the World Cup in 2019 so will see the return of more powerful carriers such as Iain Henderson, Sean O’Brien and CJ Stander to the fold.


Thank you for reading and hopefully you enjoyed the article. If you want to read more articles like this and also see what my hand written scribbles, notes and numbers looked like to allow me to produce this article, subscribe to the right or below depending on if you’re on desktop or phone/tablet to see them next week!