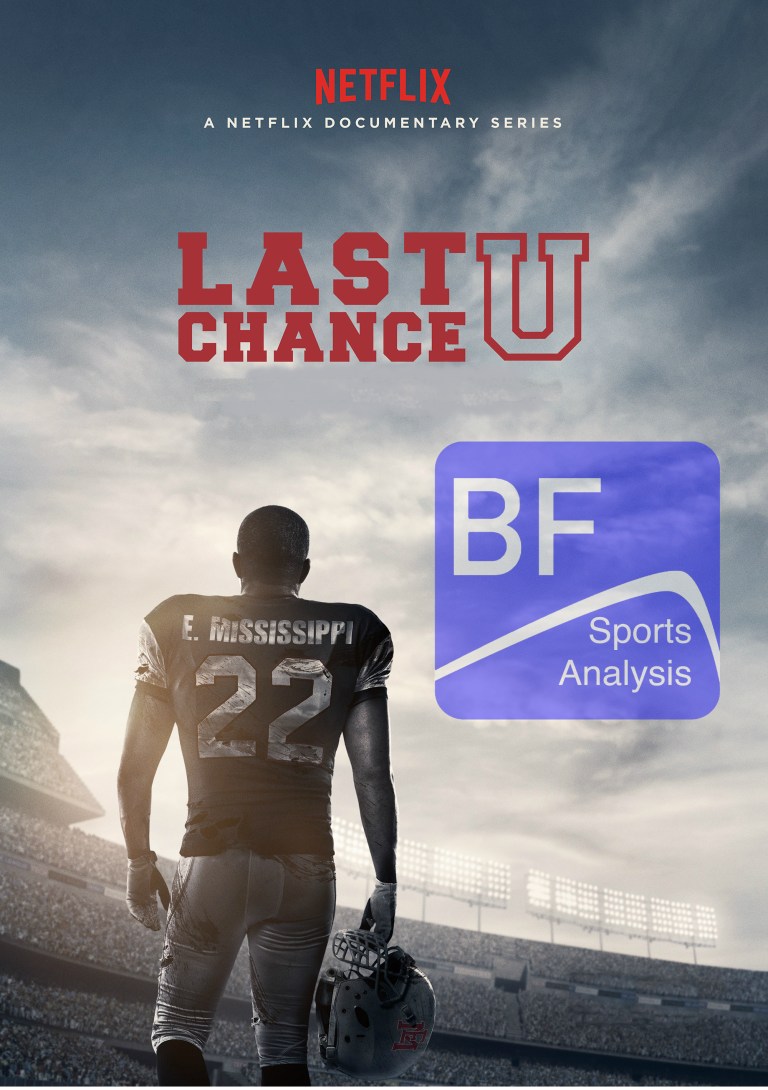 Last Chance U – From an Analysis Point of View Part 2

“Go to get out” is the purpose of the East Mississippi football programme that I introduce in part 1 of this article. Part 1 also goes through the pre and in game parts of analysis used here.
This part looks at the feedback mechanisms and how senior figures built relationships with the student athletes.
There are 6 variables in Feedback

We’ll discuss 4 of these in this article, leaving timing and the audience/group being delivered to, till another time.

Need to know/Motivation to change

Adults in particular, require a motivation to learn something. This will be referred to as the “need to know” in this article. Stronger “need to know” increases the likelihood of the learner taking ownership of their learning and finding out more information themselves and improving retention of information.
The variable of “need to know” is evident in every form of feedback and there are numerous instances that demonstrate this in the show, but I’m going to pick out one that stood out to me as an unsuccessful creation of “need to know”.
In Season 2, Defensive Lineman, Kam Carter calls a group of girls b******. To give context to this piece, Defensive Lineman Coach – Davern Williams’ targeted change of behaviour for Kam was to learn why calling girls that are helping with water, “b******”, was wrong and for him to not do it again. 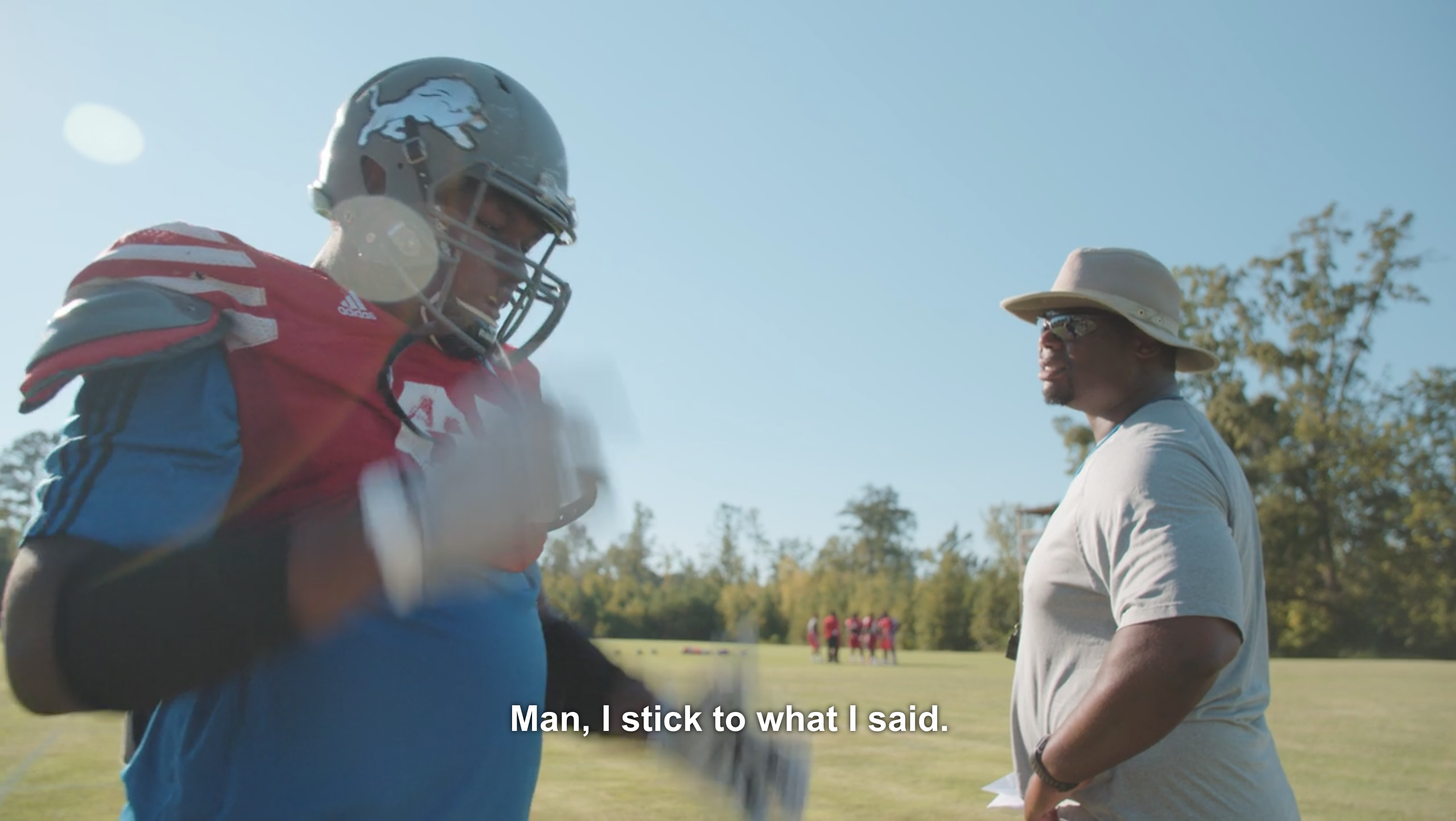 Davern Williams then makes him roll on his side 120yards as a punishment. The problem is in the end Kam does the punishment but refuses to apologise to the girls. He didn’t understand what was wrong with what he did. He was just sorry that he got caught; “I didn’t mean for them to hear it”.
Coach Williams did try to get him to understand why calling the girls who were providing water to the team was wrong. He asked Kam “Would you like someone calling your grandma or your momma that?” – Kam didn’t respond. I think Williams pressing on this point could have potentially increased the need to know and impact in this situation and make Kam not want to stick to what he said.
Coach Williams did do something quite powerful, by letting the girls decide when Kam’s punishment was finished. He then questioned Kam. 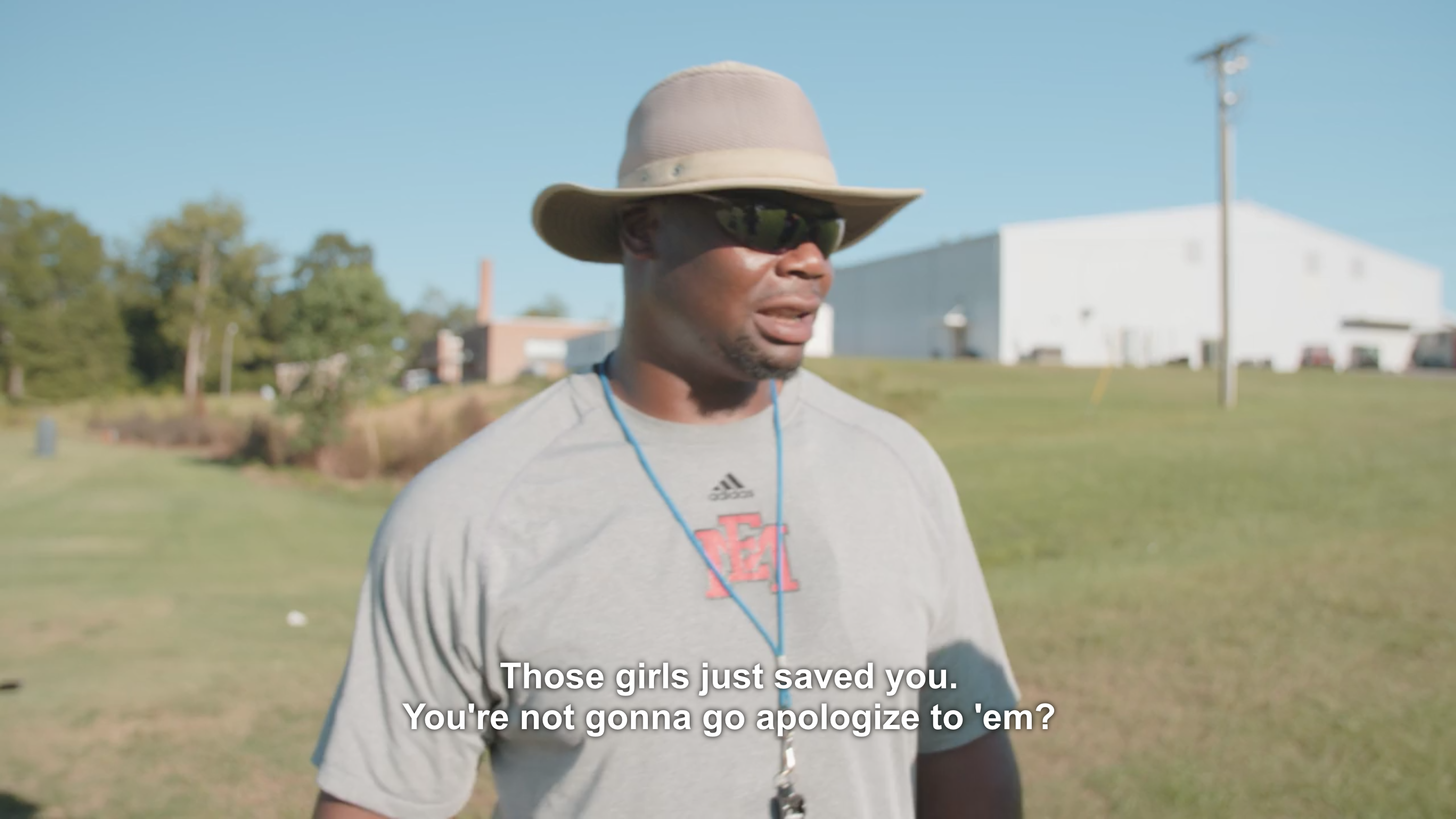 Unfortunately Kam’s emotions were directed more at the resentment of him doing the rolling than the girls letting him stop.
This incident should serve as a reminder to coaches that when you are using punishments as a coaching tool, to keep in mind that the goal isn’t to punish the culprit but to make them learn from their mistake.

They’re in agreement as to why they’re there. They’re highly motivated to become college and pro athletes. They have an agreement that playing in championship games and winning championships gives them more opportunities to impress bigger school recruiters.
An incident that reflects poor player ownership is when Coach Davern Williams wants Kam Carter to get into ice baths. 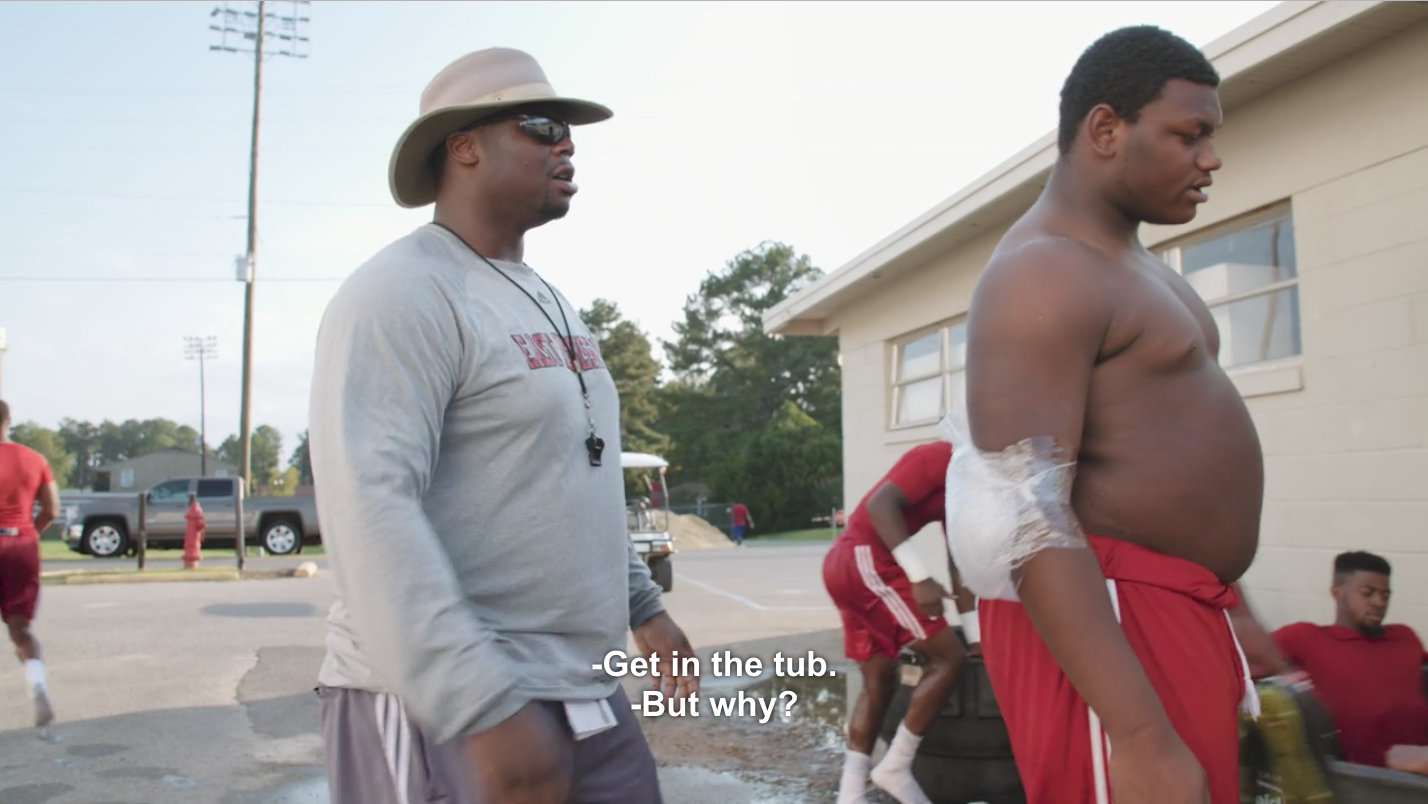 Coach Williams wants him to get in the ice bath, we assume, to enhance recovery. Kam believes it is of no benefit to him. 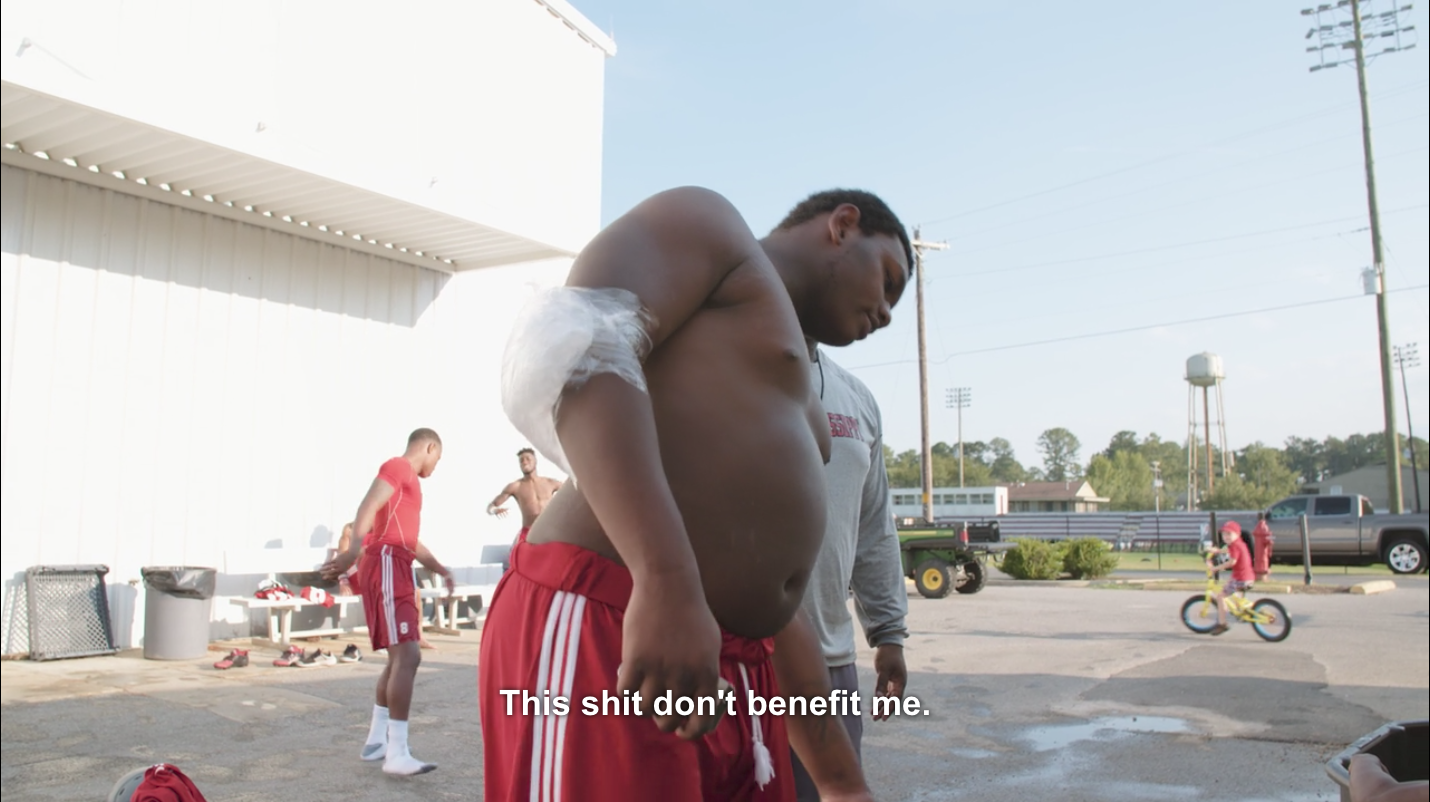 He believes “This is just a power thing”. 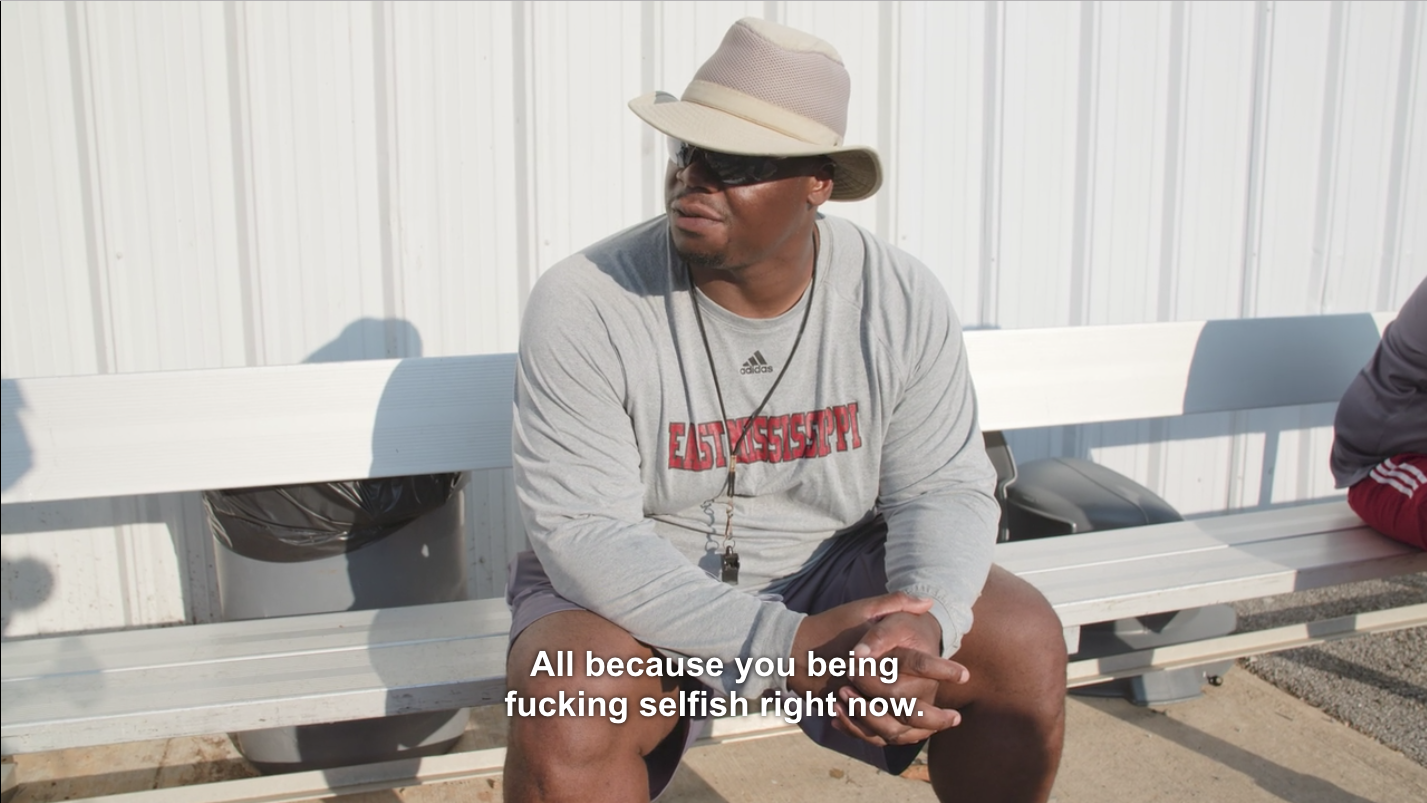 The way Coach Williams tries to get him to get in the tub is by threatening to drop him for the game. He then goes onto call Kam “Selfish”.
Kam asked “Why?” numerous times. To get Kam to change the behaviour, it would have been better to explain why it benefitted him (I’ll leave the discussion on benefits of ice baths to conditioning coaches).
What Kam needed here was a reason to believe, getting in the ice bath would actually improve his performance. As opposed to saying “it benefits you” give more detail on the benefits. Some scientific purpose here would have trumped Kam and then it would have put the responsibility on Kam to decide to benefit his team and himself or not.
It then becomes an emotive reason for him to not go in the bath and calling him “selfish” would have some more meaning attached to it.
So when you’re coaching your own teams and individuals, try to think of solutions to create buy in. This can be done in many ways from collaboration, questioning or delegating a wanted role.

This is probably the most interesting part of the show. Comparing the relationships that the different leaders build with the student athletes. I’ll only look at 3 of them in detail in this article; Miss Brittany Wagner, Coach Buddy Stephens and Defensive Co-Ordinator, Ed Holly.
Brittany Wagner, Academic Counselor
Miss Wagner, the most likeable of all the characters, probably builds the best long term relationships with the student athletes. She does this through creating a common goal with the student athletes. She wants to help them all get into better schools so they can play a higher standard of football. When the athletes get frustrated at her, it is usually them expressing their frustration at education or the system which she symbolises but they understand that she didn’t create it.

She builds a trust through actually caring about the players and listening to their problems. She cared about Isaiah getting offers but the coaches didn’t, they were more interested in winning and played him through a suspect concussion and then his ankle injury as well, as two examples.
This caring side allowed her to get players onside to help them achieve. The best example of this is where she got DJ Law to graduate. Clearly an individual very resistant to school work and studies, she managed to convince him to put the head down and achieve.
Buddy Stephens, Head Coach

Buddy Stephens garners respect due to his position as primary selector and this influences players responses to him. His  loud powerful voice and aggressive mannerisms also make the athletes listen and react to him.
With this aggression and temper he can lose his audience.
At the end of the first season game vs Mississippi Delta, when the brawl was finished and he started calling his own athletes ‘street thugs’, he instantly lost a lot of respect. Although he did do a lot to try prevent the brawl happening, he is very quick to use the word ‘you’ when things are going wrong instead of ‘us’ or ‘we’.
These character accusations happen on an individual level as well with him describing Ronald Ollie as wanting attention when he had a concussion. Ronald Ollie understandably doesn’t take this too well. 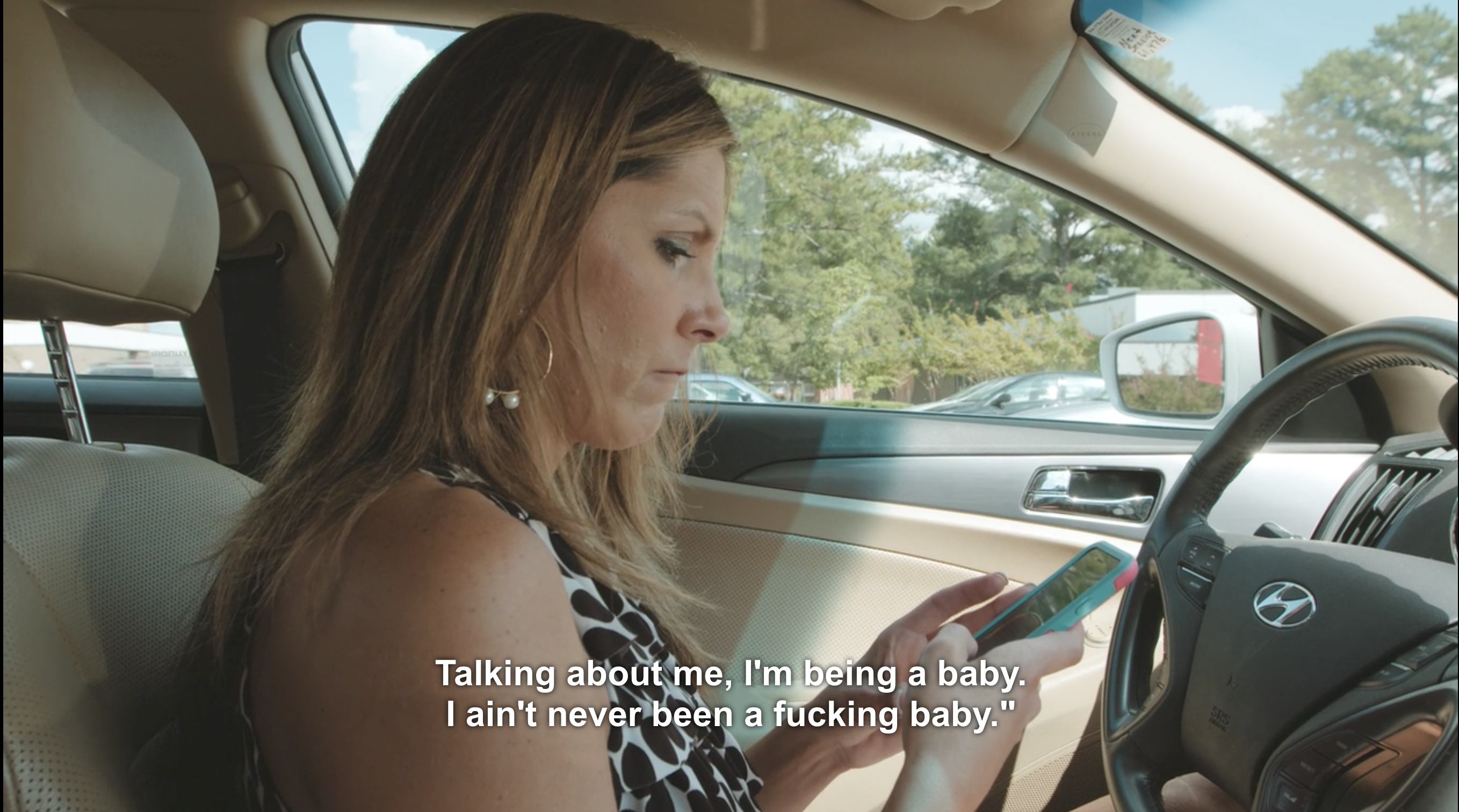 Ollie’s motivation then became reliant purely on his intrinsic motivation of trying to get a scholarship to a bigger school.
Something I encourage is to create as many stimuli as possible to achieve and/or learn. More stimuli makes the message more impactful and ultimately leads to improved performance.
His defensiveness is reflected in his relationships with his coaches on the sideline, openly demeaning them in front of the athletes. This happened frequently with Ed Holly when the defence was leaky in the 2nd season but also with Marcus Wood in the final episode of season 2. 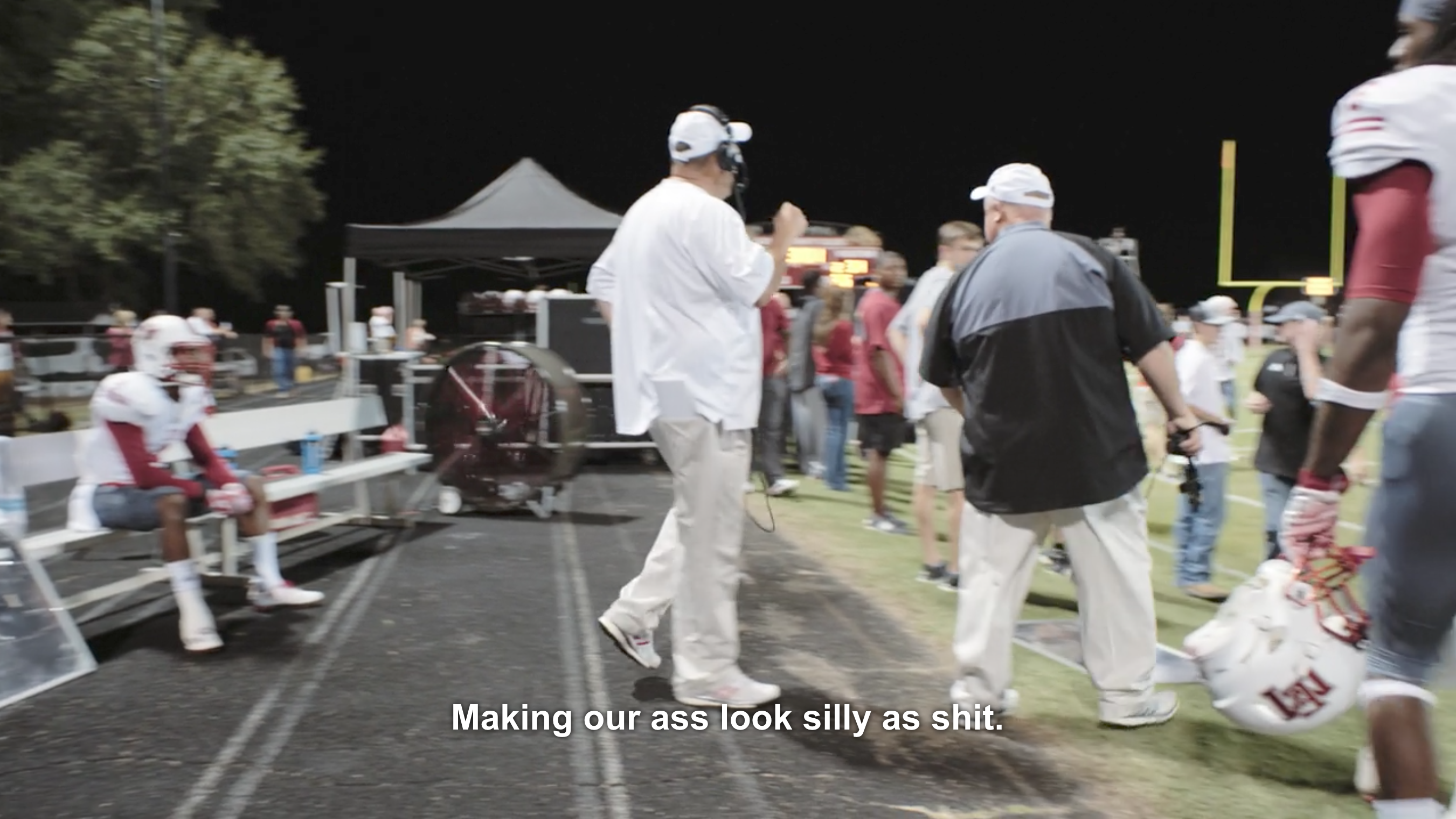 This language isolates him from people he is working with. The programme will still work as they players are intrinsically motivated by their own goals and the recruitment strategy but the resentment towards Buddy hinders individuals working for him.
Ultimately, this prevents Buddy having lasting relationships with lots of people, who’s lives he has impacted considerably. 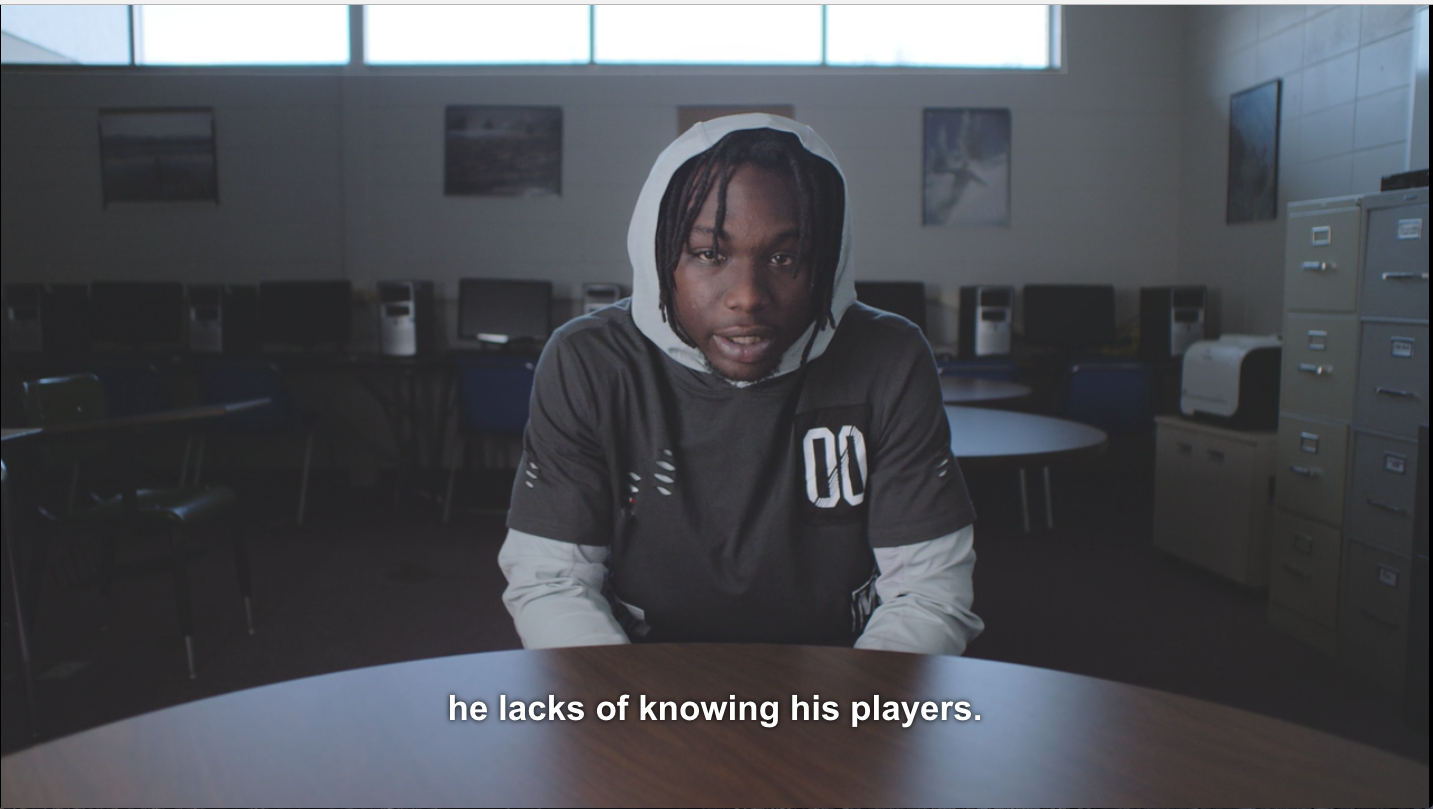 Ed Holly, Defensive Co-ordinator
What Ed Holly brings compared to the rest of the coaches is a positivity. What detracts from that positivity is when he talks nonsense.
“Where would you rather be today than on the practice field in East Mississippi?”
Saying phrases like this makes him unrelatable to the athletes. The reason they are there, as is so often stated, is to get out.
Another instance of him losing credibility delivering a message is when he pleas to his defence “Hey guys I really love coaching you guys but I need you to do me a favour”, he is also losing respect. The players evidently respond to firmness, although they like positivity and being treated like adults. A plea is unlikely to get these athletes or any other athletes to respond.
If you’re asking for something from a player/athlete, ask it in a way to challenge them, not plea to them. It is so uninspiring and loses respect from the athlete and undermines your leadership position.
A consideration for a coaching team should be how to increase the respect levels of each individual within the coaching team. This allows management teams to give feedback more directly and for the group to work more cohesively.
You can do this through avoiding disagreements in front of players, delegating responsibility such as being the person who washes the kit this week among other means.

This is where EMCC is very strong and it is a very emotive programme. When they score in front of all their fans in Scooba, the players get a big rush, they work hard for each other, they like football, when they train coaches scream at them.
One of the best examples of using high impact or highly emotive feedback was when Buddy Stephens got angry with Isaiah Wright for showing up late to a meeting on the week of a State Championship game.
“I leave my daughter’s high school game, the last time that she’s gonna perform at a half time show, and I missed that to be here at 9 o’clock.” 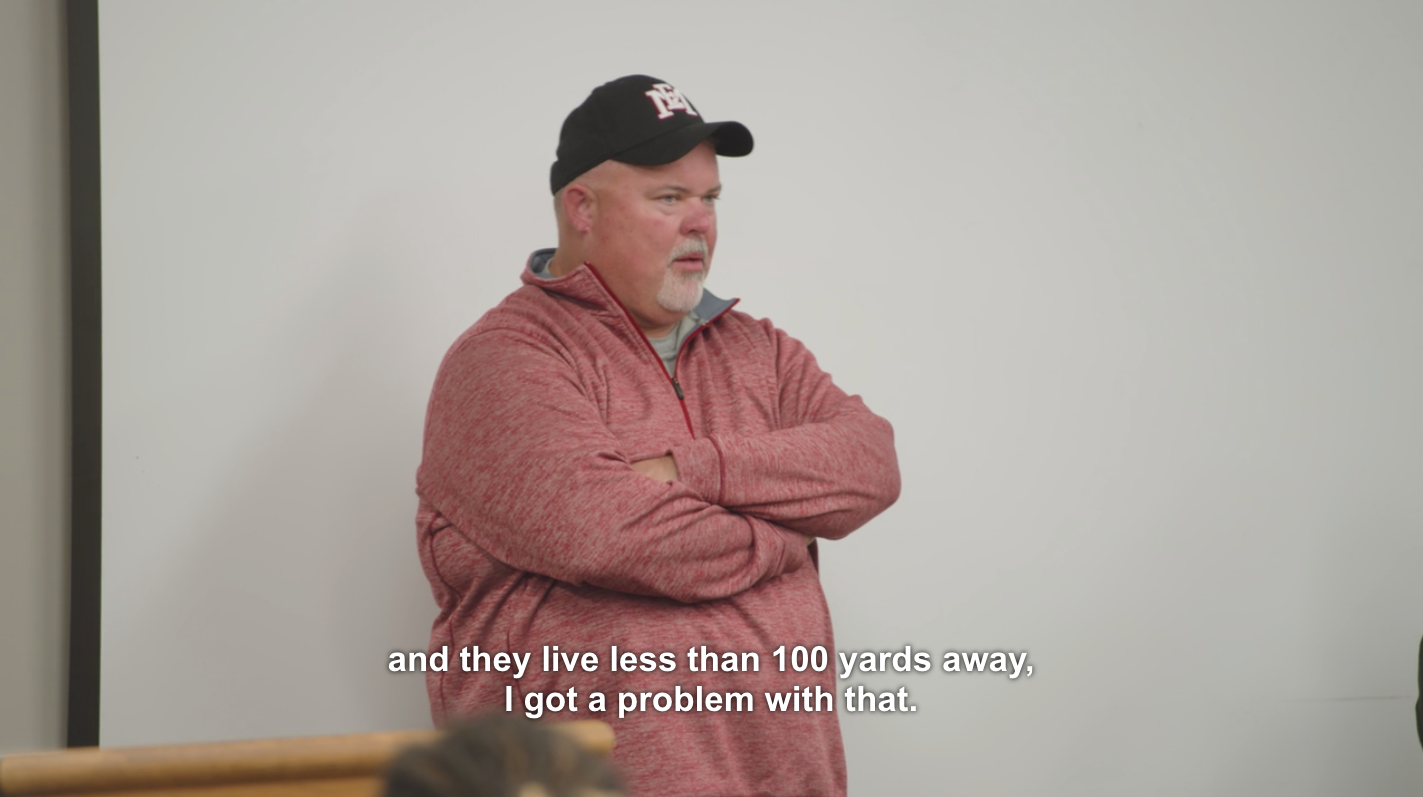 Saying this makes the sacrifice relatable to the athletes. Most people value their family highly and EMCC seems no different. It’s very emotive, how he says it, interestingly different from his more typical emotive tone of anger. 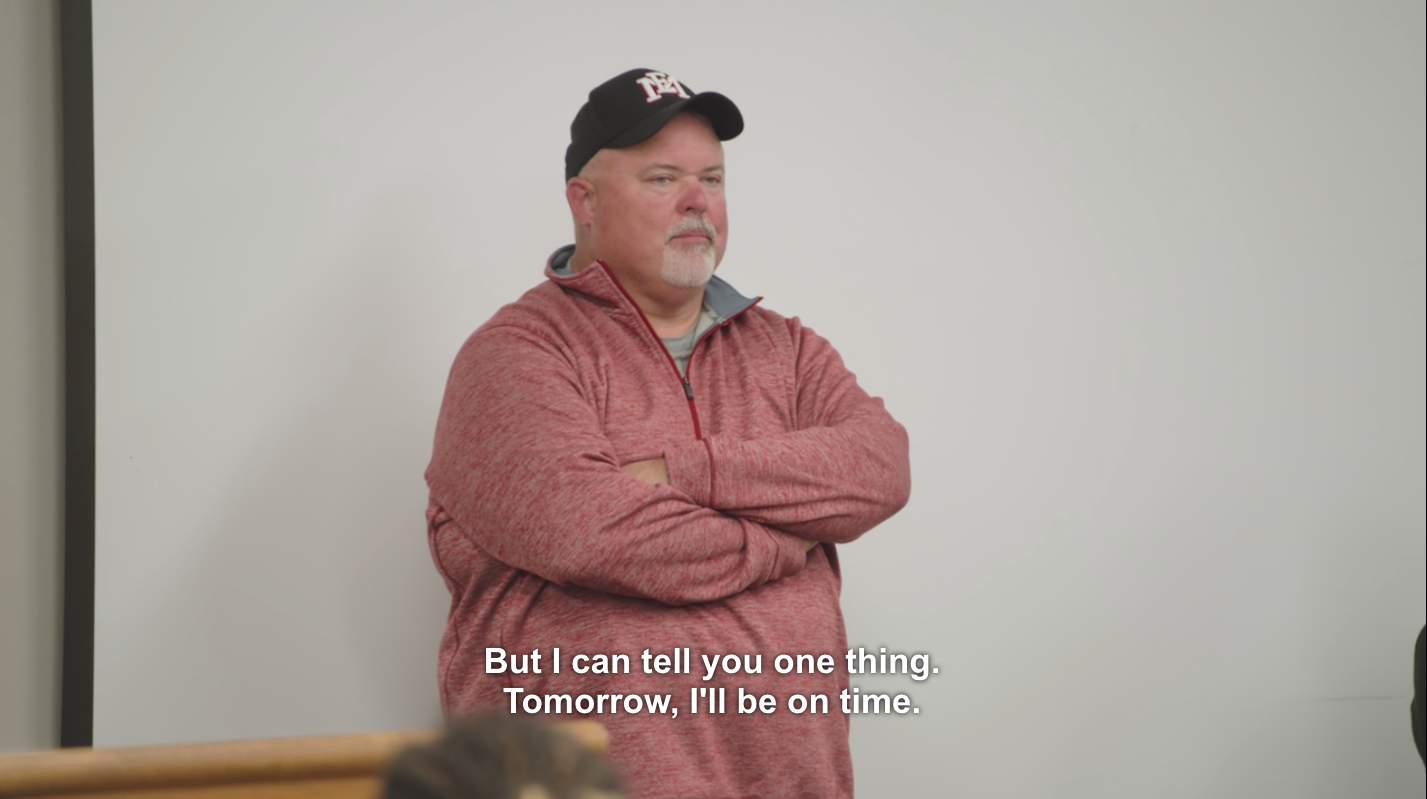 He finishes with a call to action. “I need to know, will you be there, on time tomorrow?”. He receives an almost guilty response of “yes sir”. This emotive speech no doubt created the change in behaviour he wanted, which was for his athlete to turn up on time which I’m sure he achieved.

Interestingly, after writing this article I realised that I didn’t use any examples of video or stats in this article. This article much like analysis, doesn’t always require video or stats to create, what is the ultimate goal of, improved performance.
It emphasised to me where I see the future of analysis going; becoming a far more responsive, more personable and a relationship driven profession. Analysis will move towards people using it to improve performance instead of just measuring it.
I would be delighted to hear your thoughts on this article and you can get in touch with me via twitter @brianfitzp10 or email at bfitzpatrick@bfsportsanalysis.com. And as always, if you want to see more articles like this one please subscribe on the right on your desktop or below on your phone.

I’ll be launching the BF Sports Analysis podcast soon so keep an eye out for that and get in touch if you are interested in being a guest or sponsoring the podcast.