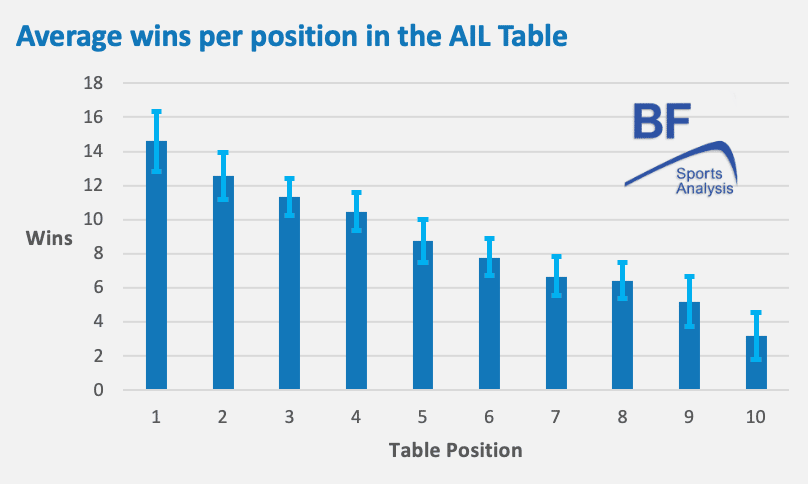 How to Win an All Ireland League Division: The Numbers

We’ve been keeping an eye on All Ireland League Stats since an article we wrote in 2018.

So what has been happening in the AIL since then (ignoring COVID)? The data we’re looking at is the league table data going back to 2014-15 with divisions 1A/1B and 2015-16 with 2A/2B/2C when they were first introduced as 10 team divisions. 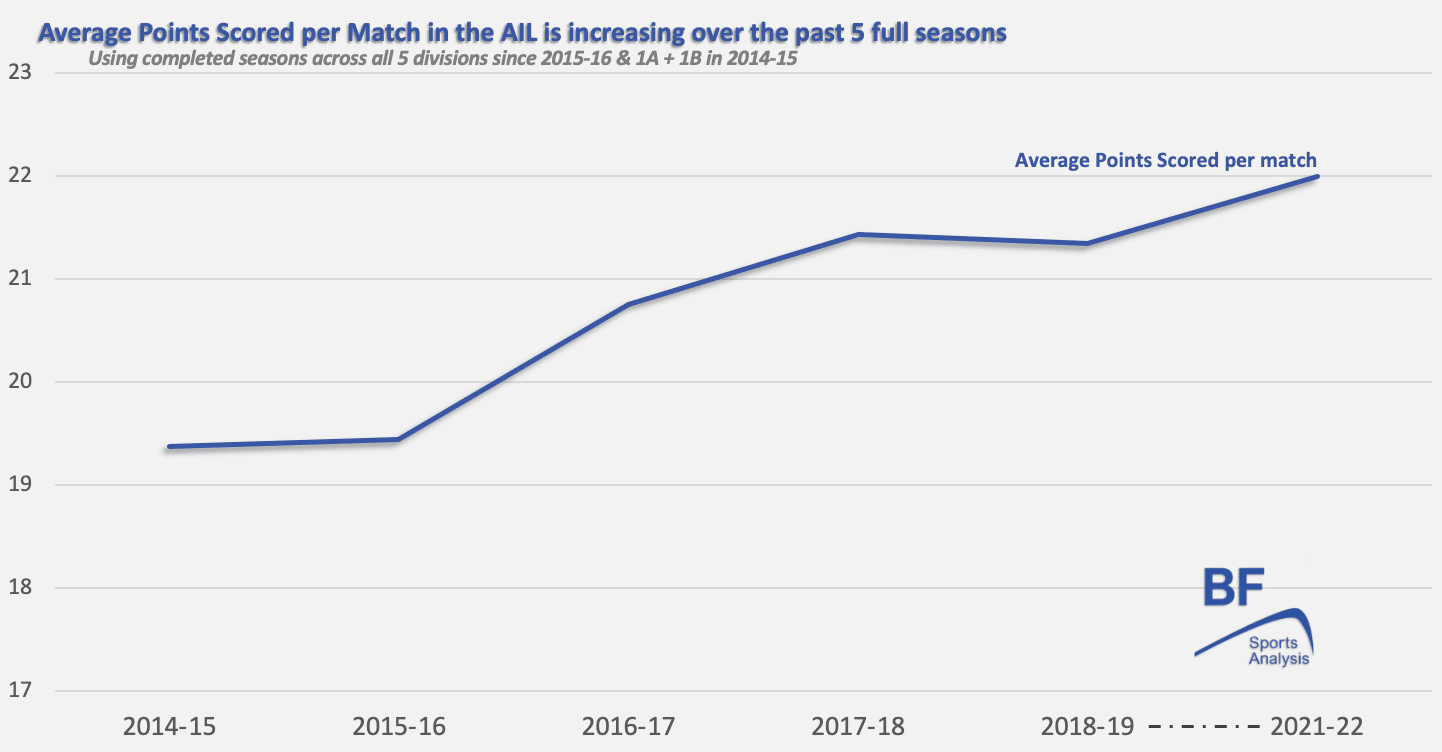 Potentially there has been more progress and innovation on the attacking side of the ball rather than defensive side in recent times.

Wins and League Points needed in the AIL

Teams, depending on their goals, will be searching through their fixture lists identifying what is going to be their toughest games and what games they’ll be targeting winning.

But if you have a goal in mind, of lets say, finishing top, making it to the play-offs, avoiding relegation, what does that look like? How many league points and wins does that position in the table normally get? 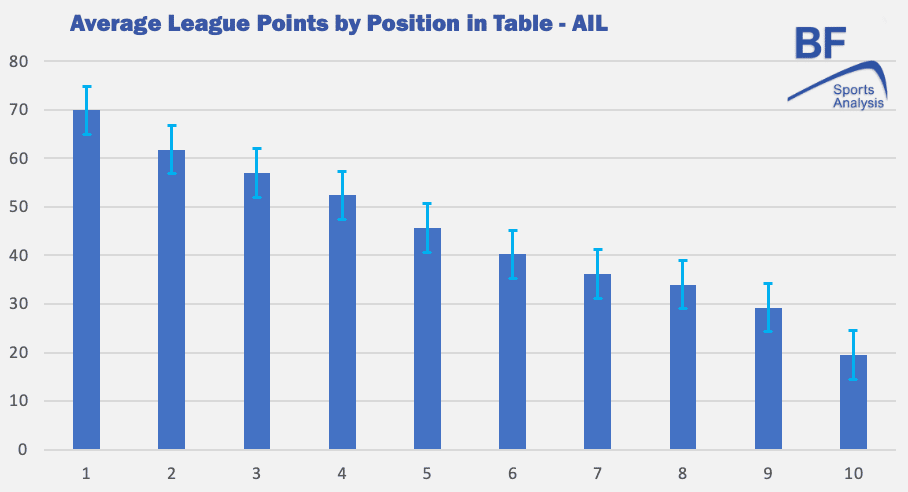 The average team finishing top of the regular season gains a mean of 69.9±7.4 league points in the table per season, or 3.9 per match. Meaning generally to finish top, you’ll need 4 bonus points for every loss you take.

The lowest amount of points a team has accumulated and finished first was Sligo’s 2017-18 2C season finishing with 56 points with 11 wins.

The highest points total came from Barnhall in their 2018-19 2B season. They racked up 84 points in their 100% win season alongside 12 try scoring bonus points.

Now to look at play-offs, where the average team finishing 4th has 52.1±4.3 league points. Young Munster are the team to have achieved a play-off spot with the least number of points in their 2014-15 season where they went 9-0-9 and had 43 league points.

Not quite, but it is certainly more important than it was last time we wrote this article.

The r^2 value on the attack is down to 0.59 from 0.63 before and defence is up to 0.54 from 0.47 before. This likely has to do with the point scoring increasing across the league therefore making scoring points less of a rarity or difference maker and now defences can have a bigger impact on the where a team finishes in the league. 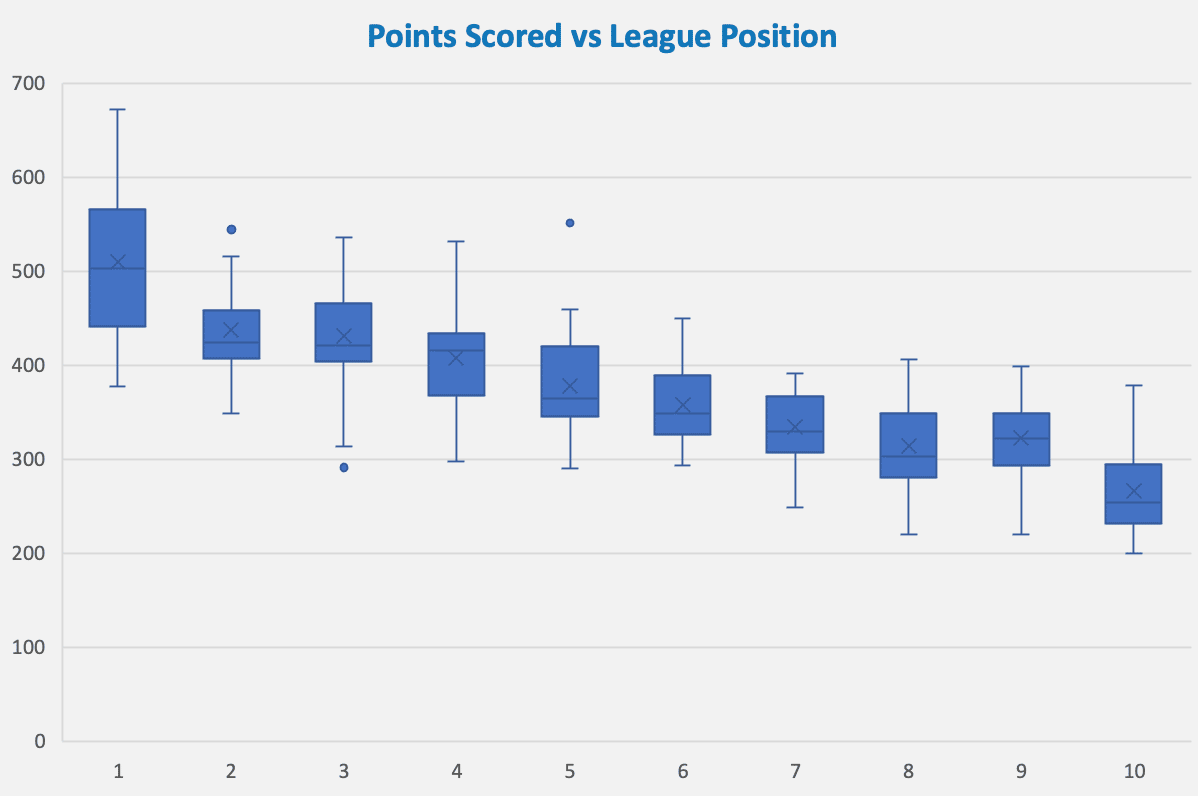 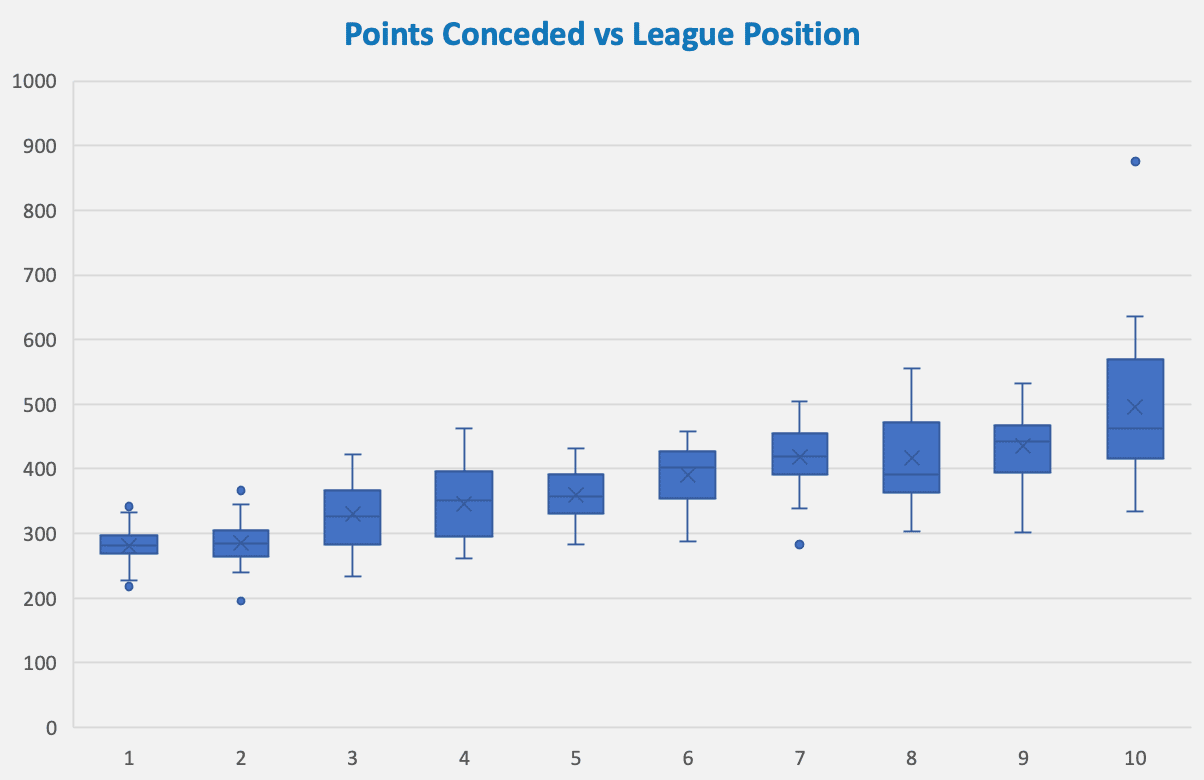 Box and Whisker chart explanation: The box and whisper charts above show that 50% of results fall within the box for the team in that position. The whiskers show the other quarters. The outliers outside the whiskers show something that fall 1.5 times outside the interquartile range. An example of this is City of Armagh’s 2016-17 season where they finished 2nd but scored 544 points. The x on the chart is the mean (average) and the line through the box is the median (mid point of data).

We mainly decided to show this as a tidier version of a xy scatter chart.

The Curse of 2nd Place

Although teams fight hard for a home advantage semi final in the play-offs, the 2nd spot in the league table has been troublesome for many teams down the years, for promotion contention and also for crowning of the AIL1A Champions.

Not since 2017 has a team finishing 2nd in the table been promoted.

Only 3 times out of 17 non automatic promotions has the team finishing 2nd been promoted.

In 1A, 5 of 6 times, the team that has finished top has won the playoffs, the exception was Cork Con finishing 4th in 2016-17. 2nd place has returned 4 runners up and 3rd place has produced 2. 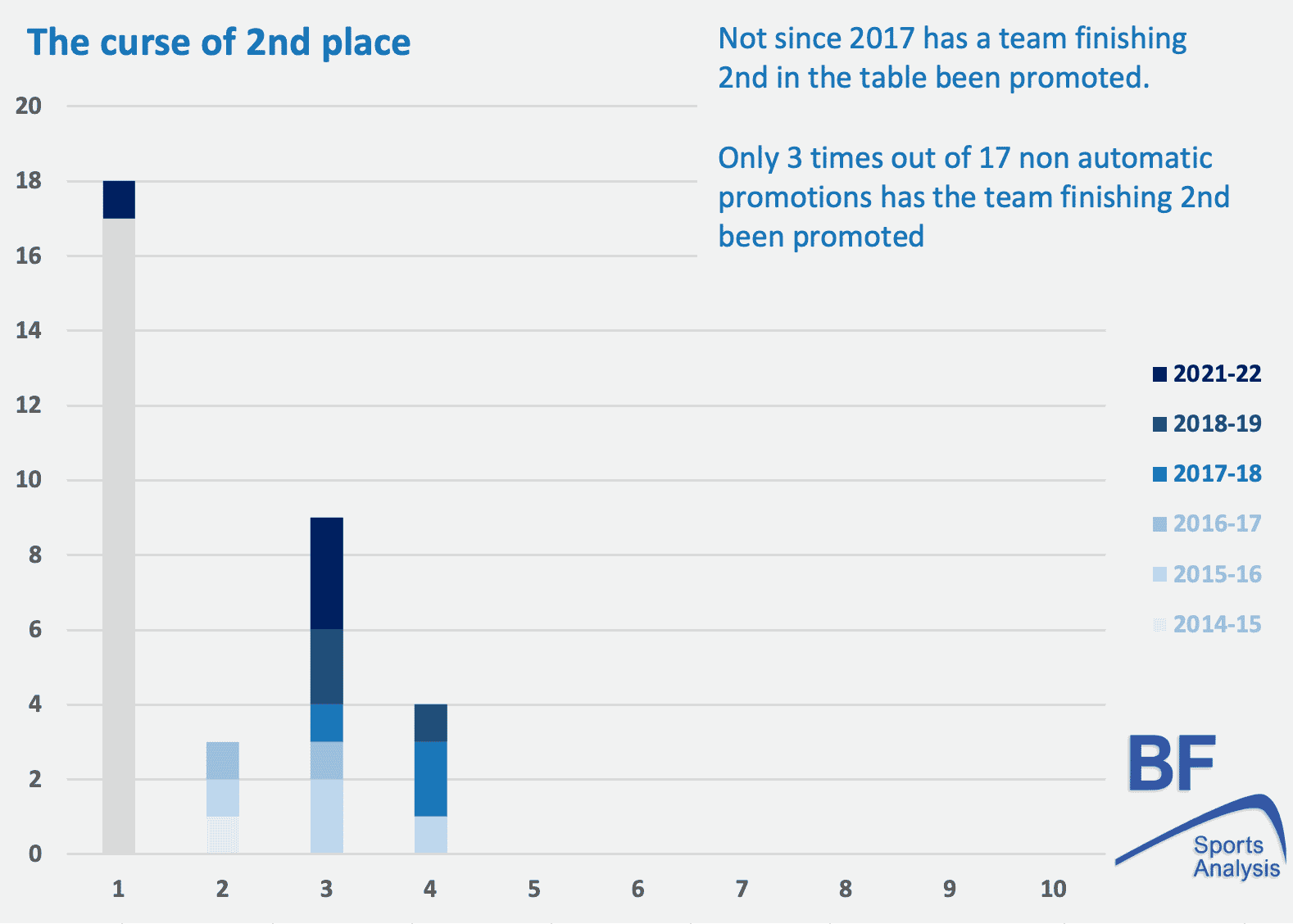 Who's progressed the most? 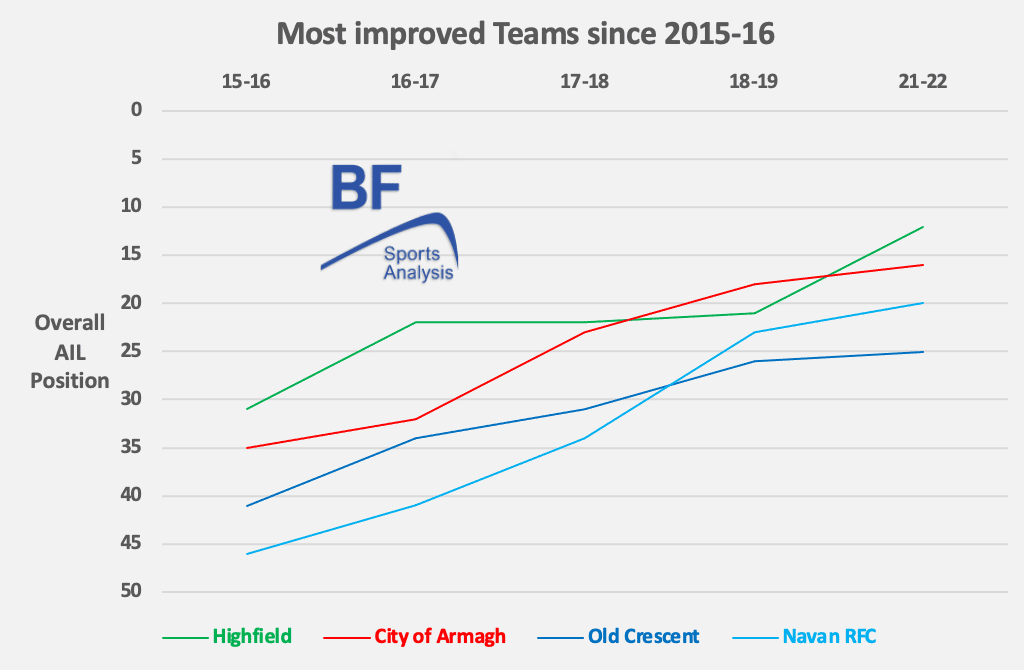 Navan, despite being relegated last season, are the most the most improved AIL team in the past 5 full seasons and will likely remain in that position if they finish in the top half of 2A this season.

Highfield, City of Armagh and Old Cresent are hot on their heels.

What can I expect from my team this season?

In the NBA, with the draft system, this reduces teams to a parity season after season bringing them towards the mean of a win % of 0.500.

We’ve decided to take this concept from Dean Oliver’s Basketball on Paper and taken his regression to mean %s from win ratios to look at where teams on average would regress to this coming season. Of course there will be plenty of outliers but this table can give us an idea of which teams are actually out performing themselves compared to last season as it adjusts for that weak teams should naturally improve and that it’s harder to stay at the top. The NBA of course has a directive to improve parity in the league with the draft system. The AIL of course doesn’t have a draft system which means a lot of the regression to mean comes from teams developing more so than recruitment compared to the NBA.

This first image will look at teams staying in the same division next season and we’ll look at promoted and relegated teams seperately. 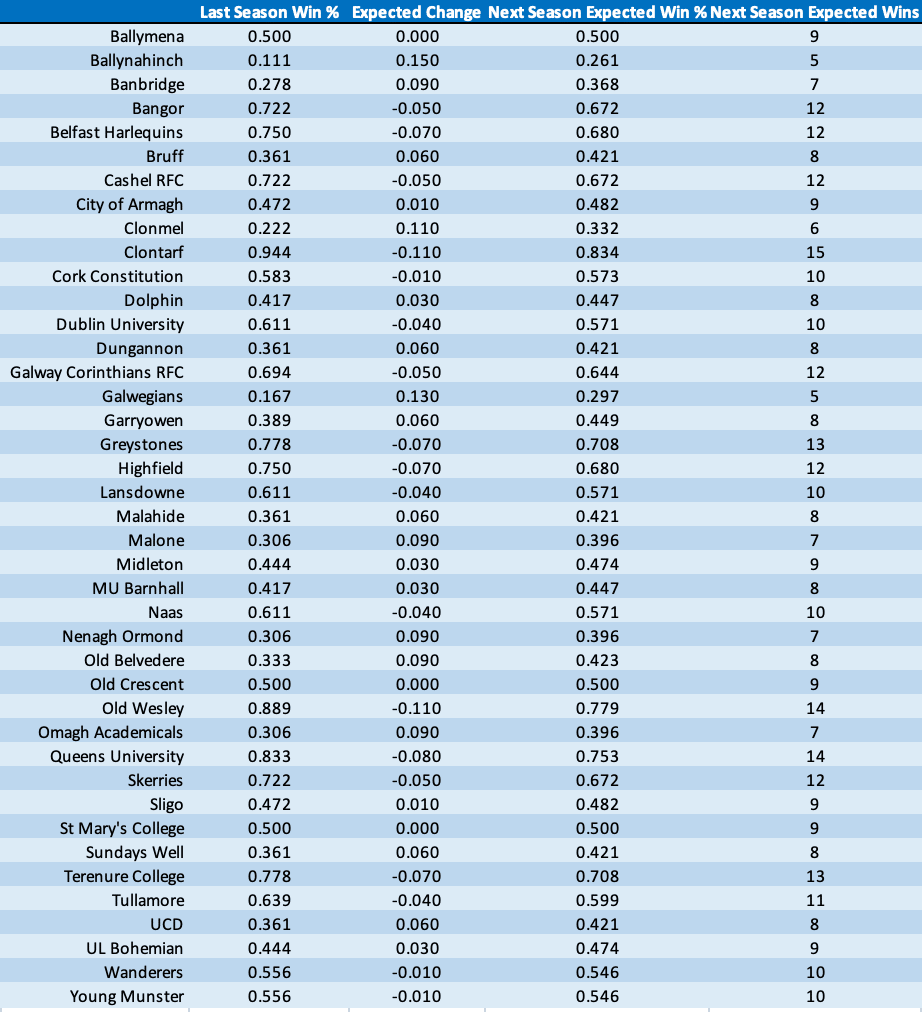 For the promoted and relegated teams, we took the approach of looking at where they finished the following season.

As we can see, in both graphs there isn’t too much predictability there.

Promoted teams fare slightly better on average than relegated teams averaging 6.0 place in the table over 6.4.

The relegated teams are slightly more predictable than the promoted teams but it’s fair to say that individual situations vary a lot between clubs promoted and relegated.

And that’s it from this year’s AIL in numbers. BF Sports Analysis provides analysis services for AIL clubs and clubs abroad. We have the most accurate services and largest analysis database in the All Ireland League.

Check out how we are working with AIL clubs in our portfolio section to see how we can help your club.
Terenure | Wanderers