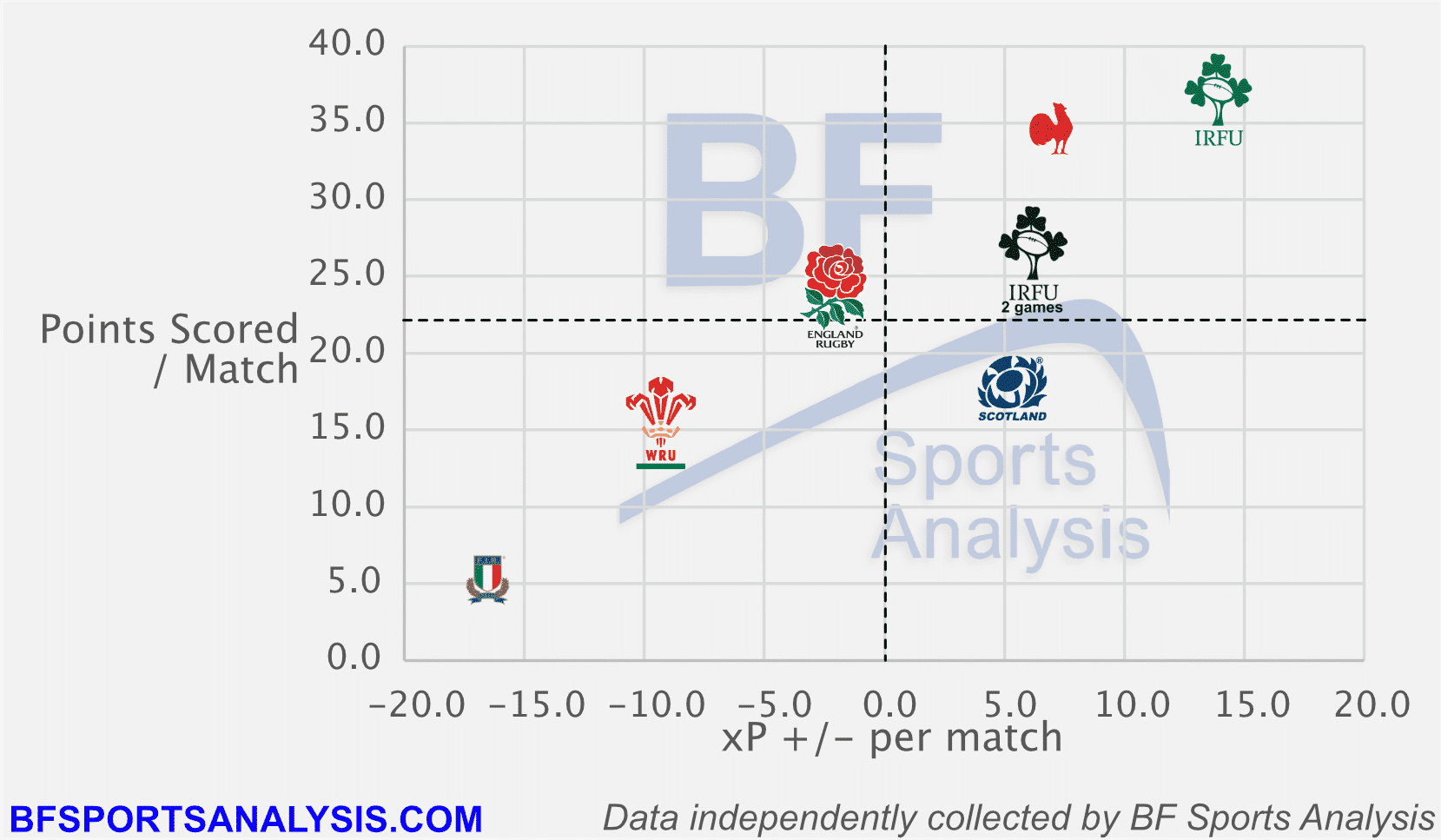 This article follows on from a similar article on the men’s 6 nations.

In this article we’ll look at different measurements of attack efficiency in the TicTok Women’s 6 Nations. All data in this article is collected by BF Sports Analysis using our trained intelligent analysts and our rigorous quality checking processes.

We can broadly look at 2 ways to improve our attack in rugby.

Traditionally, of course we’d use a combination of the scoreboard and the “eye test” to measure how good a team is in attack. Recently however, with data and analytics becoming increasingly popular in rugby, stats such as “number of 22m entries” (Creating Opportunities) and “Points/22 entry” (Taking Opportunities) have been used to measure the above. Of course the opposite applies to the defence.

Beyond this, others, including BF Sports Analysis have sought to create alternative interesting metrics with linebreaks per possession stats with Super Rugby Teams.

As with all measurements, there are limits to the application of these metrics; Japan men’s team for example like to run out of their own 22m a lot and therefore create a lot of linebreaks (7 against the British and Irish Lions for example). However it is naturally more difficult to finish those linebreaks than those created further up the pitch (Japan converted none of those linebreaks, instead scoring their try from maul peel 5m out).

Of course there is more to rugby than linebreaks and 22m entries and other stats that do effect the creation of opportunities include winning collisions, having good exits, gainline success, having the upper hand at set piece and conceding less penalties and many more.

Measuring Scoring Efficiency in Other Sports

What is Rugby xP?

BF Sports Analysis uses a database of tens of thousands possessions in rugby to compare efficiency against. This database includes games from the 6 nations since 2020, Super Rugby Aotearoa 2020, All Ireland League games, National 1 (England) games, NIRA Championship, Irish club rugby, German Bundesliga games and so on for both the men’s and women’s game. We are working through each game of the women’s 2022 6 Nations to beef up our women’s database to create a separate women’s xP database for better comparisons with our clients.

For example, our xP data has the ability to compare your points scoring efficiency from a 5m lineout to that of the average team in that position.

Our xP system focuses on team strengths and efficiencies rather than individual contribution. Basketball who are far further ahead in analytics are still playing around with this as to who to attribute the value of winning a defensive rebound too for example – what % is the shooter missing, the on the ball defender, the guy who grabs the rebound and the other players who have boxed out the shooting team. It evidently is different per each shot and do you work on an averaging method which would require a larger database to be accurate or do you try to individually account for each rebound (time consuming) or do you just give the box score of who got the rebound?

Using the above measurements of BF Sports Analysis xP, we can identify which teams are scoring more efficiently and from which possessions. But firstly, lets look at the some of the more well known measurements. 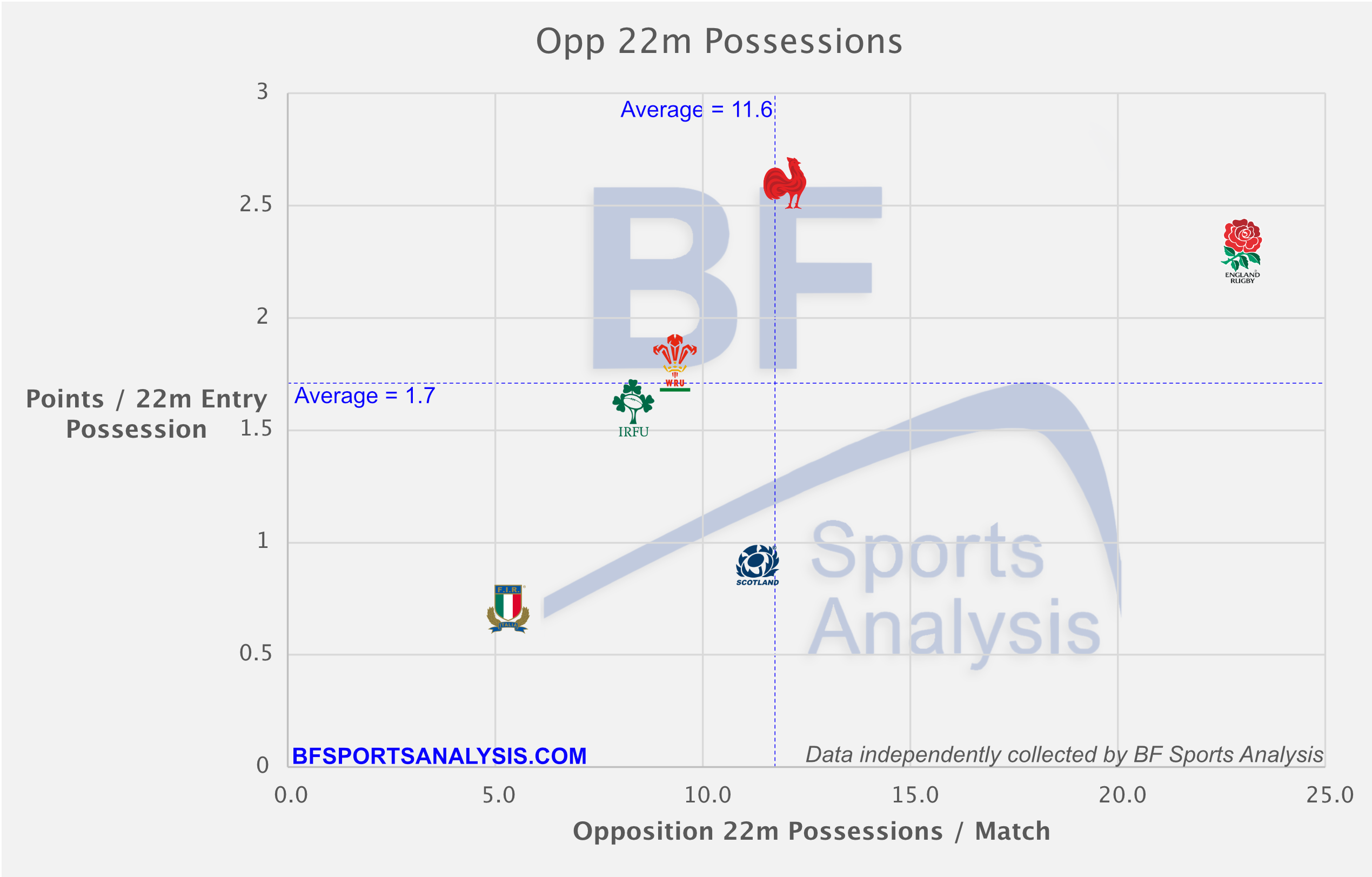 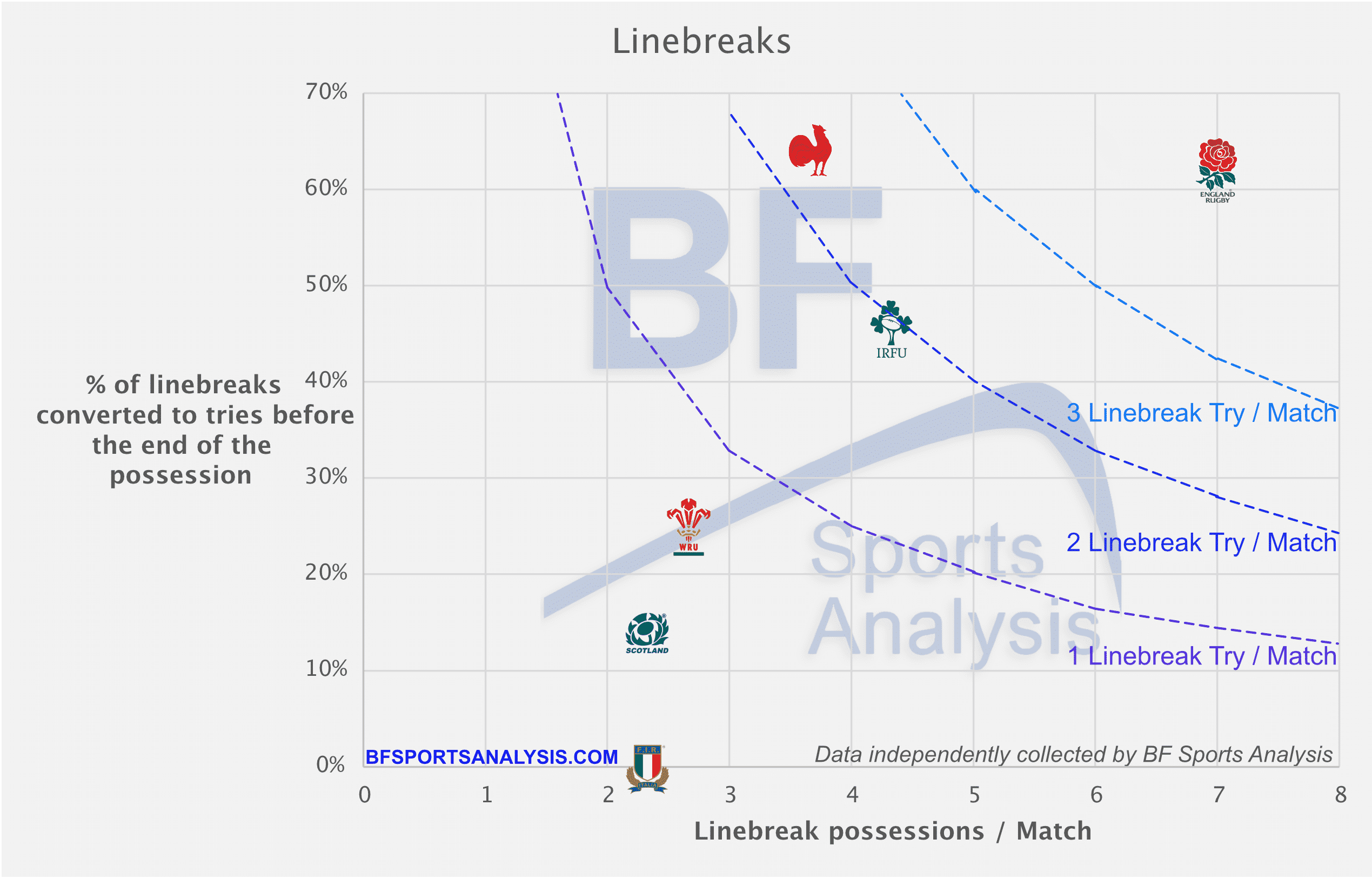 England unsurprisingly stand out on these stats.

Creating 23 22m possessions per match and 33 more over the 3 games more than the next best France. Their efficiency from these possessions is also very high with 2.3 points / possession inside the 22m, 2nd behind France on 2.6.

Similarly, England are creating plenty of opportunities from linebreaks, averaging 7 linebreak possessions per game. Much like their 22m entries they are far ahead of their nearest rival in this aspect, Ireland on 4.3/match.

Linebreaks are about finishing them as well as creating them. England are again a close 2nd in this aspect.

Using these 2 graphs we can consider England as a team that creates a lot of opportunities but don’t convert them at the same rate.

France are creating around the average of opportunities in this league but are efficient at scoring from them.

Ireland are doing well on the linebreak front but not as well on their 22m entries compared to Wales who also compare well against Scotland and Italy. 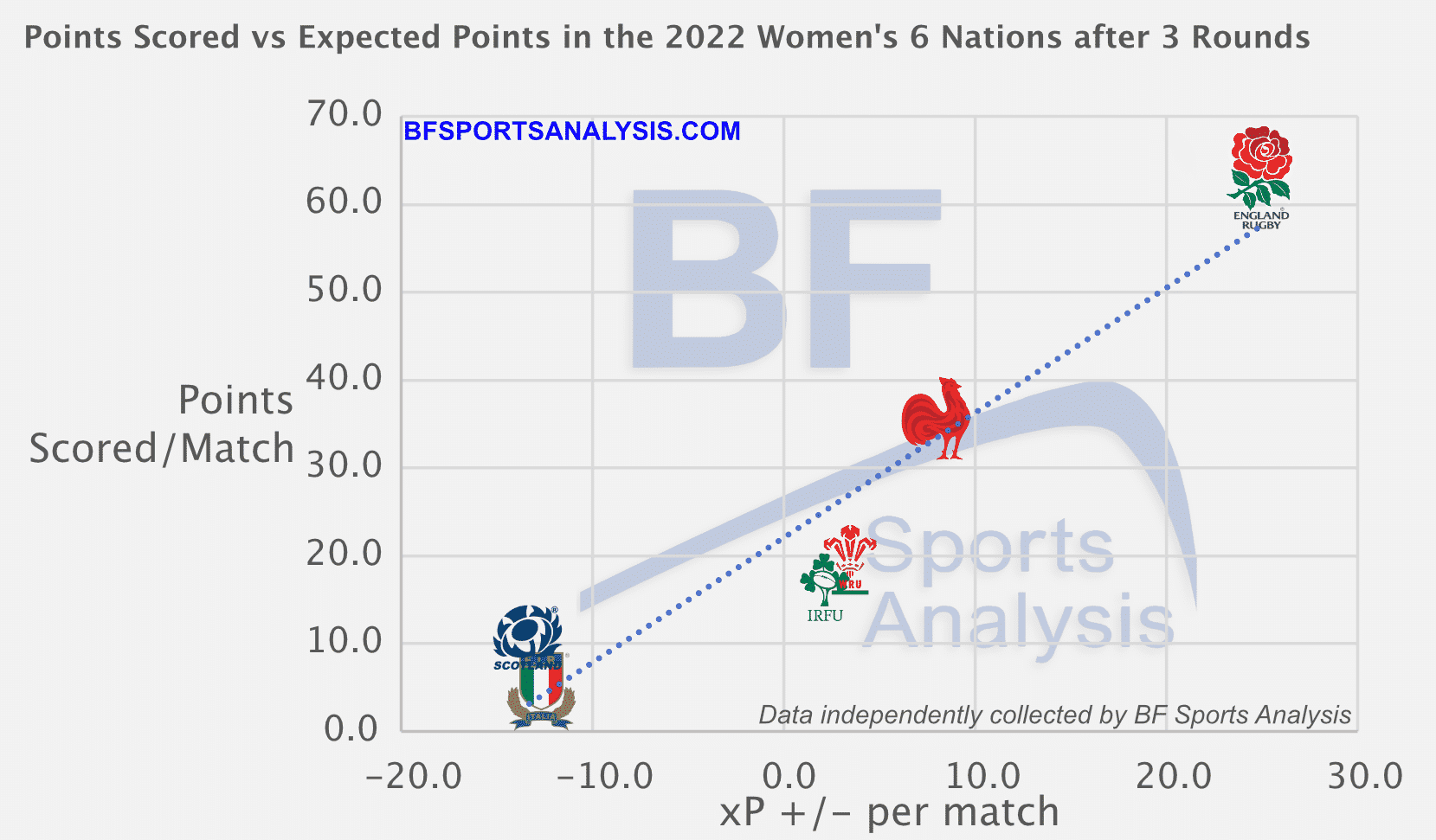 BF Sports Analysis xP here allows us to see who is efficient at converting possessions in to points. As both stats are worked from points scored as a variable, there is no surprise that there is a linear correlation (R^2 = 0.91).

Using a single metric to measure something often leaves an unfinished picture. So lets take a look at these attacking efficiency stats together.

We can see combining these 3 attack efficiency and attack creation measures that teams tend to fit in the league table together with their stats. And this can point us towards where each team could look to improve in their attack.

England are far and away the strongest team.

Worryingly for the other 5 teams, England can still improve by reducing their turnovers in the opposition 22m.

England’s lineout, which is 24/25 (98%) outside the opposition 22m with 22 of those won clean, drops significantly to 81% won inside he opposition 22m. Alongside the lineout turnovers, 1 scrum loss and 7 breakdown turnovers or penalties against leave some areas for England to look to improve and overtake France as the most efficient team in the scoring zone.

39% of France’s possessions end with a kick (56 kick turnovers and 2 50:22s). 78% of those kicks are for territory. Heavy long kicking teams like France are trying to do a few things;

1. Gain territory.
Which they are doing well with the 2nd most 22m entries behind England. They’re also the only team to have had a 50:22. This is playing to their strengths with the massive boot on Jessy Tremouliere.

2. Create attack opportunities in a more unstructured environment. Or hope they kick it out into touch to give them a platform further up the field.
This hasn’t been so successful for them as they have only scored 1 try from kick returns, their vs xP is +1.9 showing it is above average but probably not giving them the return they would hope for. This doesn’t seem to really be France’s reasoning for this tactic.

3. Avoid Turnovers.
They have the most possessions/breakdown turnovers at 21, far ahead of Ireland next at 13.4. Although they are 4th when it comes to avoiding handling errors/possession.

4. Have a higher ball in play time to tire out opposition.
France have scored 5 tries in the 2nd half vs 10 in the first meaning that this part of the strategy doesn’t seem to be paying off. This could be due to the elastic band effect that we’ll touch on in a future post.

Wales are a team that will be happy with their ability to execute inside the opposition 22m. Their lineout vs xP being 27.1 points in the positive column on this side which will please Head Coach Ioan Cunningham, who was formerly Forwards Coach with the Scarlets. A big part of that is their cleanliness from the lineout having the 2nd best lineout in the competition not far behind leaders England.

They’ll be less happy about their ability to score from deep being 4th in the linebreaks chart and 4th on converting them. Only 2 of their 10 tries have come from outside the 22m.

Ireland’s attack will please new Head Coach Greg McWilliams with the 2nd most linebreaks in the competition.

Where the concern starts for Ireland is their set piece which is effecting their 22m entries (5th in the competition). Having the worst lineout in the competition is hurting their ability to get up the pitch and make those linebreaks easier to convert.

Scotland will be relatively happier with their attack creation, with 3rd most 22m entries. What is letting them down is converting those opportunities with the worst Vs xP in the competition which seems to be stemming from their inability to convert their 22m opportunities such as in the dying minute vs Wales.

They’ll be hoping for more tries like their well worked try vs France in the video below.

Italy have the most run dominant game in the 2022 women’s 6 nations. 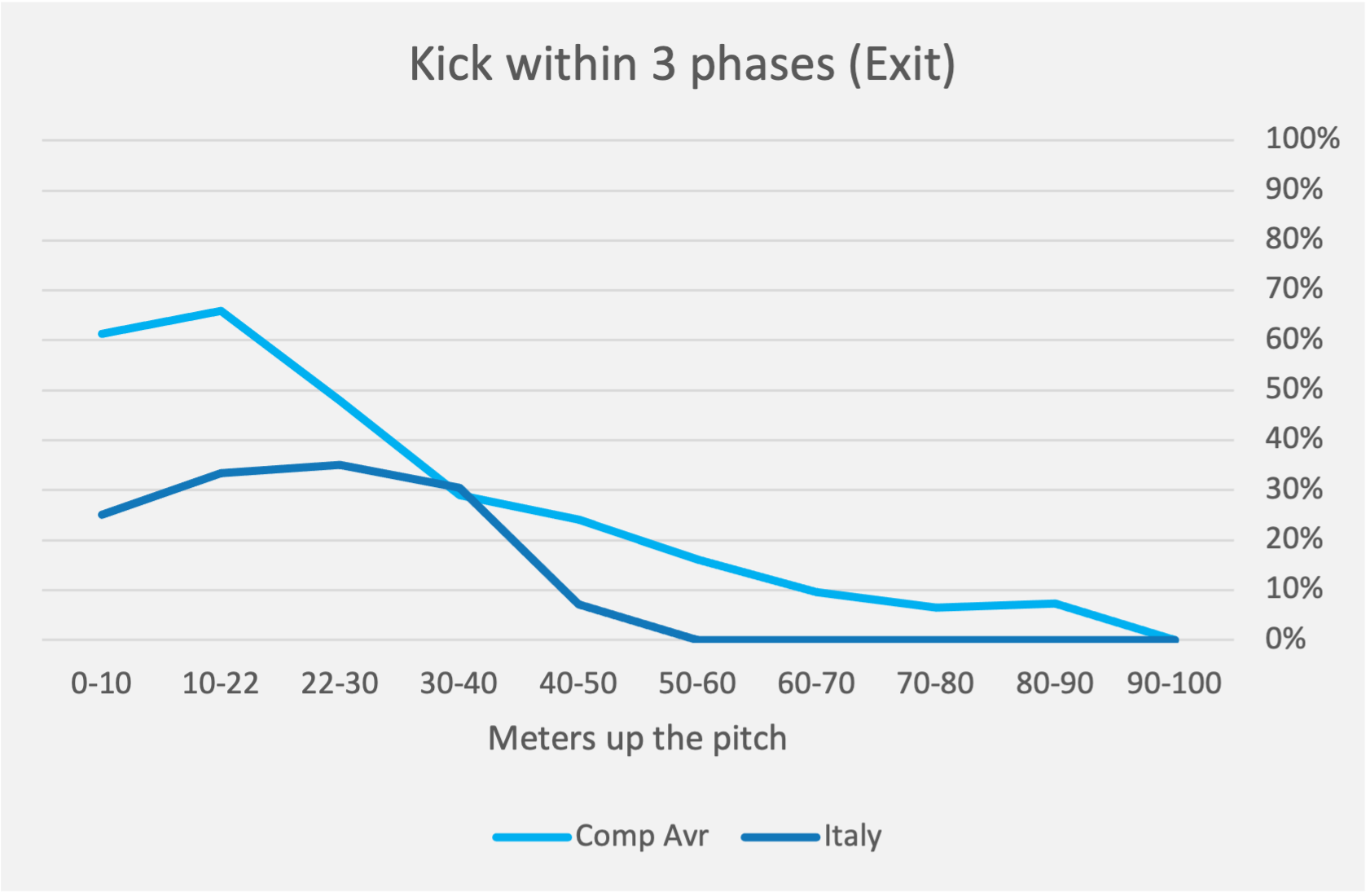 Heavy run and passing teams generally lead to more linebreaks, with Italy tied 5th with Scotland in this metric meaning they’re not really getting the return on investment from running the ball out as they’d hope. They also have the fewest 22m entries in the competition. Also teams that run the ball a lot hope to gain from penalties the opposition give away from offside or in the ruck, which Italy have vs their penalties conceded in attack but still less than Scotland and England have.

They retain the downsides of running the ball out with a handling error every 6.8 possessions being the highest in the competition although their possessions / breakdown turnover or penalty are actually 4th indicating good work there.

The beautiful thing about rugby is how there are so many different ways to win a rugby match evidently as shown above. It’ll be interesting to see how teams adapt their games after a week break and as coaches have implemented their systems, how their focus changes to the opposition more in the latter rounds.